The British Olympic Association (BOA) today announced that Great Britain will have the opportunity to utilise the maximum three Host Nation Qualification Places available to compete in wrestling at the London 2012 Olympic Games.

The International Federation (FILA) lays down the number of Host Nation Qualification Places available but it is the National Olympic Committee (British Olympic Association) who take the decision on whether the places can be utilised. 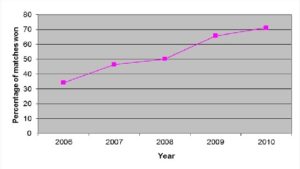 One of the key pieces of evidence that demonstrated the creditable performance of the British Wrestling World Class Programme was a graph of the increasing number of world class matches won by GBR wrestlers over the past four years.

Shaun Morley, Performance Director, GB Wrestling said “We are delighted with the faith shown in British wrestling. It fully endorses our year on year development as a sport, but also the consistent improvement of our elite wrestlers, some of who are now regularly among the medal contenders at international events.

“Indeed, it makes me very proud that British wrestlers are now being treated with increasing respect from our rivals when we’re abroad, and that means they know that facing one of our competitors is a tough call.

“Our athletes, coaches and administrators have put in an enormous amount of hard work to lift British wrestling to where it now is, and I am greatly encouraged by our development.

“Now we are all really excited about competing at the London 2012 Olympics, but we are looking further afield than that, and Rio 2016 is already on our radar!”
British wrestler Leon Rattigan said “Competing at the London Olympic Games is as good as it can ever get for a British athlete, and wrestlers are no exception in our desire to compete, and make an impact. I can only speak for myself, but I have seen the standards of the international squad of which I am a proud member increase steadily since I first started competing with it.

“We have great coaches, a wonderful support staff, tremendous enthusiasm and a desire to showcase our sport to the country, and to do that by showing them that we have wrestlers on the GB squad who can hold their own with the very best. I hope I am among them!

“For me, taking part in an Olympic Games in my home country would be a dream come true. Every time I turn up for training, every time I attend a tournament, it is being a part of London 2012 that drives me on – and I am sure that feeling is shared among all the GB wrestlers, striving to be a part of it all next year.”