Day 2 started with high hopes and ended for the Home Nations with 2x Bronze medals.  Congratulations to Leon Rattigan and Viorel Etko. 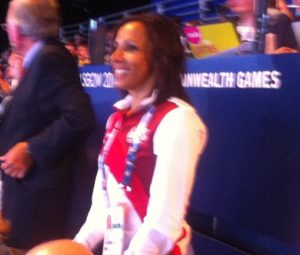 Leon got through his early rounds against Shikongo of Namibia and tariq of Pakistan. But after a defeat by eventual Silver medalist Kadian of India and a move to the repechage, Leon turned on his attacking mode and beat Tamaru of Nigeria 12-2. 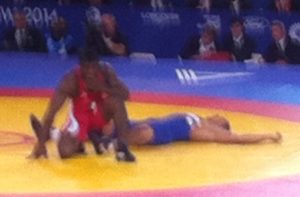 Leon did not disappoint and gained a Bronze medal to go beside his wife Yana’s Silver of the previous day. At the end of the match he lay out exhausted, but delighted.

There was media delight at a highly energised Yana supporting and encouraging Leon from the stands throughout. Said FILA, “Leon RATTIGAN (ENG) earned bronze on Wednesday, sealing up a husband-
wife medal combination for Team England. Rattigan’s wife Yana — who took silver on Tuesday at 48kg — was her husband’s enthusiastic supporter throughout the tournament, even slipping past security to greet him with a post-bronze embrace in the media mixed zone.” (link) 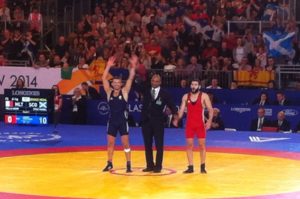 Viorel Etko (61kg) defeated England’s George Ramm in the quarter finals before going out to Tremblay (CAN) the eventual Gold medallist. In the repechage, Viorel met Vella (MLT) defeating him by fall to rapturous applause with a final score of 10-0.

George Ramm also took part in the 61kg category.  George competed at 17yrs old (His 18th birthday coming one day after the close of the wrestling competition). An imaginative and justified decision by the Selection Panel, George had an explosive start to the day, beating Smart (AUS) 15-3. However, he then met Viorel who defeated him 17-6 in a match that swung both ways. During the morning, George thus achieved a FILA Senior match win and a total of 21 points gained in this competition. (Link to Bolton News item)
Hugh McCloskey (Northern Ireland,) competed in Leon’s 97kg competiton, going to repechage after taking 5 points (16-5) off Gill (CAN) the eventual winner. In the repechage Hugh was defeated by Belkin (NZ) and finished with a position of 5th overall.

Said Barry Pollin, President of the Northern Ireland Wrestling Association, “this was a hugely important event as both Hugh McCloskey and Noric Koczarian [who wrestled on Day 3] have shown great character as wrestlers and how good results can be achieved on a minimum budget. We are hopeful that their performance can lead to future funding and even better showings in future competitions”
Oleksandr Madyarchyk (61kg) was defeated, after a promising start, by Bajrang (IND) silver medallist and in the repechage, Daniel (NGR) proved too good for him (14-4).
In an upset, Olga Butkevych (58kg,) one of England’s medal hopes, tried to do too much too soon with Stone (CAN) going down 14-5. But Stone was then beaten by eventual silver medallist so there could be no repechage for Olga. 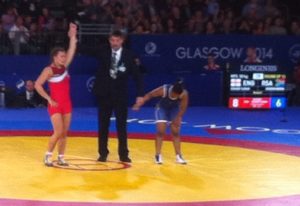 Also in the 58kg category was Sarah Grundy, hopeful of a Bronze medal to go alongside her brother’s. Unfortunately, after spirited wrestling, including her nail biting defeat of Gordon (RSA) 8-6 where her final 2 points came in final 2 seconds, she was defeated by eventual Gold medalist Adenyi (NGR,) and lost out in the Bronze medal match to Ford (NZL).

In the 53kg category there was an all Scottish quarter-final between Jayne Clason and Shannon Hawke. Shannon got the upper hand with a 14-1 win. But then Shannon was defeated by eventual Silver medallist Lalita (IND) and then by Madi (RSA) 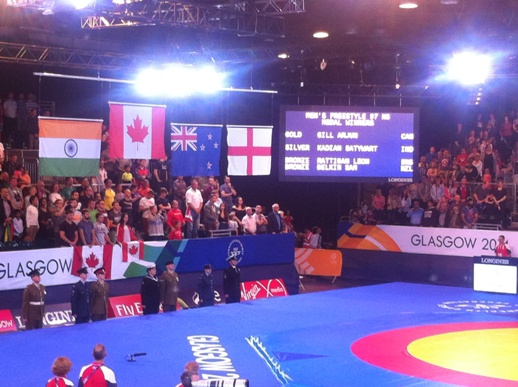 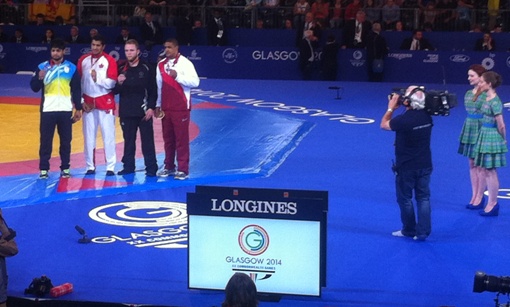