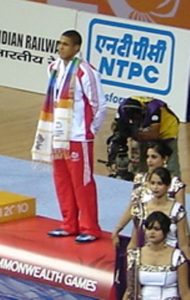 Shortly afterwards, Rattigan beat Pakistan’s Muhammad Umar on points in the 96kg freestyle to add another to wrestling’s tally.

Madyarchyk, originally from Ukraine but now living in Sale, won by a fall in the second round. Madyarchyk was given the judges decision after tying the first round 2-2. He found himself 1-0 down in the second but with 30 seconds remaining threw the Nigerian, achieving a bout-winning fall.

“I was thinking the judges weren’t going to give it to me so when they did it gave me confidence for the second round,” he said. “I feel proud and also grateful and satisfied, but not 100 per cent.”

Rattigan was fighting in the second last bout of the evening. The 23-year old is British and English 96kg champion and was among the favourites for a medal in Delhi.

“It was tough to get back into it after I lost earlier in the day but I’m happy to get bronze,” he said. “I didn’t want to make a mistake because there was a medal at stake. He had a go at it in the second round when he was attacking and I was just defending. When I saw that there were three seconds left I just avoided him.”

Leon’s medal was presented by Jo Cassar, the Sec Gen of Malta’s CGA and Josip Mrkoci, Chairman of the Commonwealth Wrestling Association 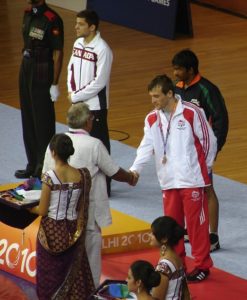 Sasha was cheered on loudly by Jo Madyarchyk, his wife, who had wrestled for England (Day 4,) in the Female Wrestling 51kg category.

Dame Kelly, shown concentrating on the wrestling below, was impressed by the wrestling tournament, especially the high quality and well populated Indira Ghandi Sports Complex and the crowd’s fervour!  One of the best events of the games… 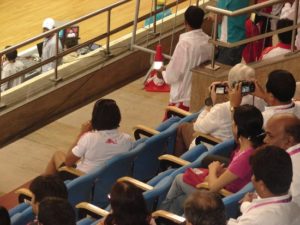 Good luck to all those wrestling in Day 6!