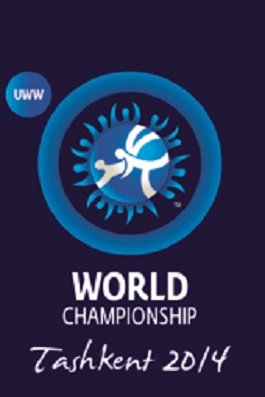 There were 32 competitors in GBR’s Yana Rattigan’s 48k weight category but the computer chose to draw her against her sister-in-law, Mariya Stadnyk.  From a strong wrestling family, Mariya’s husband and Yana’s brother is Andrey Stadnik, who won an 66k Freestyle Olympic Silver medal at Beijing 2008, coached by their father Vladimir Stadnik, who, so sadly, passed away very recently.

United World Wrestling’s write up about Mariya prior to this event was “London 2012 silver medalist Mariya STADNYK (AZE) is back from maternity leave and has won five events this year, including the European championships and the GGP [Golden Grand Prix] Final, to take the No.1 ranking from Tosaka.”  See bottom of this page for full September 2014 UWW Women’s 48k World Rankings.

It should be remembered that earlier this year Yana underwent shoulder surgery and only just made competition fitness in time for the Glasgow 2014 Commonwealth Games in late July.

After going on to win against China’s Chun Lei 7-0, and Argentina’s Bermudez 10-0, Mariya lost against the eventual Silver medallist, Poland’s Matkowska (winner of the 2012 European Championships) in the semi-final match by a late penalty point under the new rules.  Mariya went on to win Bronze in style against Emilia Vuc of Romania, 11-0 in just 49 seconds.  The weight category was won by Eri TOSAKA (JPN) who repeated her 2013 as world champion (and she was runner-up in 2012).

Review of Day 3 by UWW’s William May: 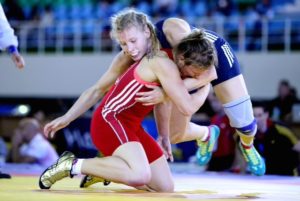 Aline FOCKEN (GER) foiled Japan’s bid to win three titles on the first night of women’s events at the world wrestling championships with a late takedown for a 5-4 triumph in the final bout of the evening.

Trailing 3-4 with only 20 seconds remaining in the 69kg final, Focken dragged 2013 world bronze medalist Sara DOSHO (JPN) by and followed up with a takedown from behind at the Gymnastics Palace for the 5-4 win.

“I can’t believe it!” the 23-year-old student from Krefeld said after her victory. “If I can sleep tonight, I will try to understand it all in the morning.”
Germany’s last wrestling world champion, in any style, was Brigitte WAGNER (GER), who won the 48kg crown in 2002 in Chalkida, Greece – also with a last-second scoring technique.

In other finals, Eri TOSAKA (JPN) repeated as world champion at 48kg and Chiho HAMADA (JPN) kept the 55kg title in Japan for the 13th year in a row. SUKHEE Tserenchimed (MGL) also became Mongolia’s second-ever world champion in female wrestling with a 12-3 win at 59kg.

Sukhee started slow in the 60kg final but finished strong with a variety of low-level attacks against London 2012 Olympic Games bronze medalist Yulia RATKEVICH (AZE) for a 12-3 victory.
Mongolia’s first world champion SORONZONBOLD Battsetseg (MGL), who won the 59kg crown in 2010, is scheduled to wrestle Friday at 63kg.

Sukhee was ecstatic about winning the gold and told reporters, “Mongolian wrestling and the team are getting better. We are working like a team and we can see the results.”
“I also have to thank (Mongolian wrestling federation president) Asashoryu for all the effort he puts into our women’s program. It has made us better.”

Summaries of the medal finals:
48kg – Tosaka found the rhythm and range in the second period against Matkowska and scored on a pair of single-leg attacks for a 10-2 victory.

UWW September 2014 Women’s Freestyle World Rankings:
“48kg – Former European champion Iwona MATKOWSKA (POL) added the Poland Open title to the Spanish Grand Prix crown she won in July in her return to international competition and breaks into the rankings at No. 13.
Matkowska tagged Asia silver medal winner ERDENESUKH Narangerel (MGL) with a technical fall in the semifinals and defeated Alina MOREVA (RUS), 8-1, in the final. Erdenesukh holds steady at No.9 while Russian world team member Moreva enters the rankings at No.14.