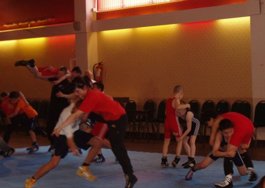 The Northern Region Centre of Excellence Event is taking place at Bolton Club on 3rd Dec 2011.

This is the fourth such event since March 2011 and attendance at each event has been growing.  Wrestlers of Podium Competition standard and age 11-18 years of age are encouraged to attend.

Ultimately, this Centre of Excellence will evolve into the North’s Regional Training Squad as part of the England Talent Pathway that will be implemented during 2012.

With so many Clubs and parents already at one location, the Northern Region Executive is taking the opportunity to hold its December Meeting at the same time to continue its drive to consult and involve everyone in the Region in the growth and development of wrestling.  More information on the England Talent Pathway will be available at the meeting.