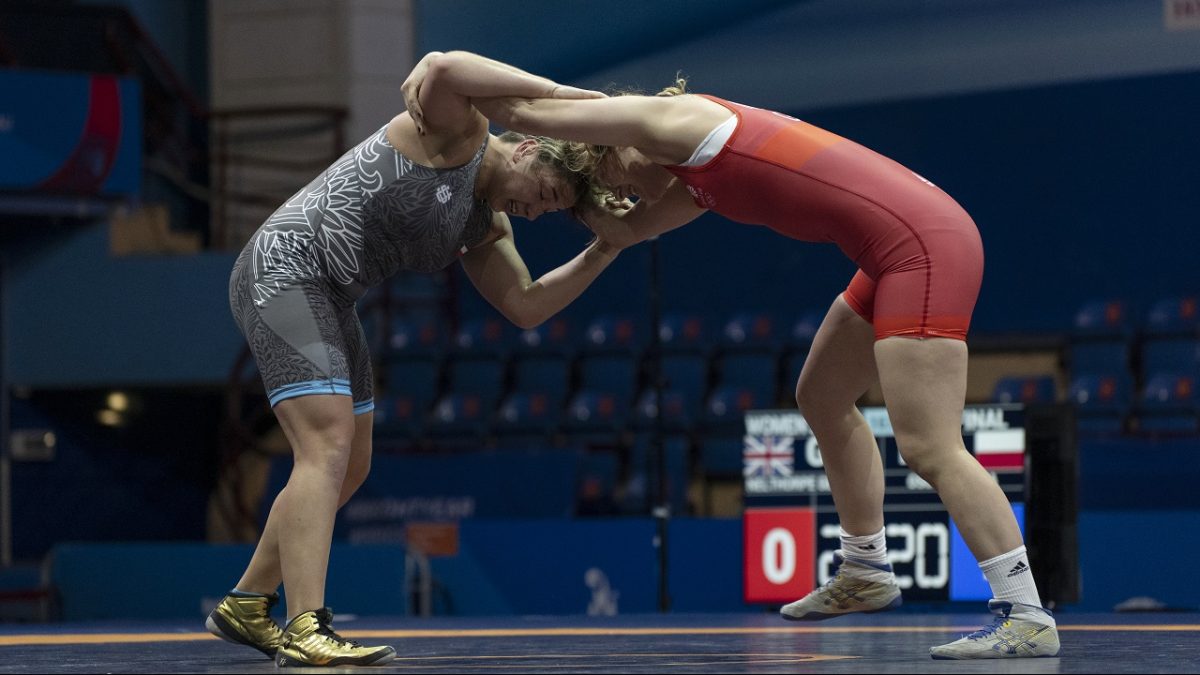 As results become available, Georgina Nelthorpe has achieved a notable 7th place in the European Games in the 76kg weight Category in Minsk, Belarus.

Georgina got off to a good start in her first match.

Winning by a pin over Daria Osocka (Gold medalist at 2015 U23 European Games) of Poland, the commentary from Coach Eddy Kavanagh, “Was 1-1 early in 2nd round, when Polish athlete went for a leg attack and scored. Georgina countered (with the Polish athlete 5-2 ahead) and pinned her after getting control in the scramble”.

Georgina performed well and wasn’t too far away from the Aliyeva in terms of class. Georgina is definitely making progress and closing the gap with the other 76kg wrestlers out on the international circuit.

“It was a pity that Aliyeva could not beat the eventual Silver medalist, Francy Raedelt of Germany, [who recently placed 8th in the U23 2019 European Championships] as that would have put Georgina into the repechage,” said Eddy Kavanagh.

Eddy continued, “Georgina and I have both enjoyed our Team GB experience and everything has gone to plan. We had a Team GB physio as additional support on competition day and Laura Hanna (British Olympic Association Deputy Chef de Mission) came to watch Georgina compete which was nice. I have also made friends with British Boxing who would like to do some work with us in the future.

Alison, Georgina’s mother, said “Georgina had some very strong competition from some of the worlds very best wrestlers at the Games but, as always, I was very proud of her performances, her character and her participation and representation with Team GB.  I would just like to say how excited my husband and I were to be able to make it to the Games and support Georgina in Minsk.”

The matches are summed up by Team GB reporting (Link) with statements by Georgina herself:-

Elsewhere in the wrestling it was confirmed Georgina Nelthorpe placed seventh in the women’s -76kg category, Team GB’s best ever performance in the event. Reflecting on her performance, Nelthorpe said: “It went really well, it was a very tough competition, so I’m really proud of myself. It was a bit of a slow start, I think that was just down to nerves, we went into the second round quite close and she went for a leg attack and scored, I was able to counter, get control and pin her. The first match is always the hardest, so it meant a lot to win.

“The second match I thought I was a bit unlucky, she was quite technical and you could tell she was experienced, but I was happy with where I was mentally and I feel like I’m catching these guys up and in some cases overtaking them. It was just a shame that having lost, she (Aliyeva) couldn’t then beat her next opponent as I would have had a shot at bronze, but when the result came in I was ecstatic to finish in the top eight. You couldn’t get the smile off my face. Representing Team GB was a dream come true, I couldn’t ask to be part of a better team.”

Much thanks must go to the British Olympic Association for their extensive support for British Wrestling, Georgina and Eddy across the whole 2+yr build-up to the Minsk Games themselves – across all the elements from selection, qualification, registration, travel to vital physio support on the day.  Thanks also to David Ong, GBR (Senior) Squad Administrator, Barry Pollin (Operations and Academy Manager) and all those at Georgina’s home club of Sharples who have worked tirelessly to enable this to happen.

Thanks also to Department of Culture Media and Sport (DCMS) and UK Sport who awarded Aspiration Funding (see link for further information) to British Wrestling.  This funding, initially made available to George Ramm and Kane Charig has been extended to Georgina Nelthorpe.