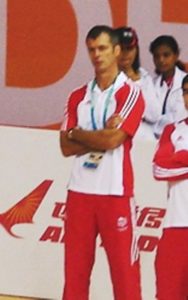 ENGLAND’s Team Manager, Shaun Morley, has heralded his teams’ accomplishments at the 2010 Commonwealth Games in Delhi.

England will still return home with four medals, including Myroslav Dykun’s gold in the 66kg Greco-Roman category.  And Morley declared his squad’s performances as a job well done.

He said: “We set a target of between three and six medals here, so four’s within that range. I would have to say that’s a successful Games.

“Maybe on a different day we might have had two athletes doing a little better, and if they had I would’ve said we’d have had ‘a significantly successful Games’.”

In the final day of freestyle action Philip Roberts breezed through the early stages of the men’s 66kg, beating Kenya’s Jacob Munene but he met his match in form South African Heinrich Barnes in the semi-finals, which he lost without scoring a point.

Scott Gregory, wrestling in the 55kg category, beat Scotland’s Craig McKenna before losing to Nigerian Ebikewenimo Welson in his semi-final.

Jag Bhullar lost comprehensively to Gene Kapaufs from Australia, after being level at the end of the first period.

Overall, the 2010 Delhi Commonwealth Games have been the most successful since 1986 when Noel Loban won a gold medal for England.