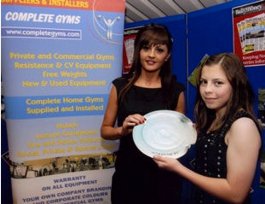 WHAT a weekend it was for Gracious Phillips with the wrestling protegee bagging two top gongs in a matter of hours either side of the border.

The pint-sized grappling ace (12) took gold at the Irish Open Freestyle Wrestling Championships in Dublin on Saturday morning and then raced up home to lift the North Antrim Sports Awards’ Young Sportswoman of the Year trophy that evening.

A potential Olympian of the future, Gracious – or Gracie to her friends and family – is the current British number two in her weight division at Freestyle Wrestling and took gold in the Northern Ireland Open and Northern Ireland Closed Championships.

Away from the mat, Gracious skippers both the hockey and football teams at Coleraine High School.

She was the sole representative from the area participating in the Irish Open Freestyle Wrestling Championships in Dublin and returned with the top medal and Irish title at the first attempt.

Hours later she attended the North Antrim Sports Awards – organised by the Ballymoney and Moyle Times – at Lissanoure Castle, Loughguile and received a further accolade and tribute to her sporting prowess.

Speaking after winning the Young Sportswoman of the Year award, Gracious said, “There were lots of talented girls in my category and I feel very privileged to win the award.  “My family and friends have helped tremendously. I’m delighted.”

Gracious has been rewarded for years of hard work and dedication to obtain the necessary skills to reach the top of the sport.
Proud dad Steven identified another vital ingredient to her success.

“Gracious has been fortunate enough to work with some excellent coaches that have brought out the best in her,” he said.
“In particular Alan Ashcroft from the Causeway Judo Club.
“Saturday will live long in the memory of our family and we are so proud of Gracie. She deserves it.”

Until recently Gracious had to travel to Londonderry to train with the Waterside Sharks and Mohammad Ali, the current senior British champion, on the more technical aspects of the sport. However, things are about to change and as of next Sunday [25th October 2009] the Joey Dunlop Leisure Centre will host Ballymoney’s first Freestyle Wrestling Club.  The club will be known as the Causeway Giants and further information is available at www.cgwrestling.co.uk

Gracious added: “I hope lots of new people will try out the sport, especially girls.

Gracious is also a recipient of an award from the Mary Peter’s Trust and wishes to thank all of the decision makers who manage the fund for giving her additional support.

Credit: With thanks to the Article in Ballymoney & Moyle Times