Ambitious Olga wants to do it for Britain! 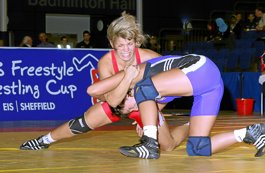 British Olympic wrestler Olga Butkevych has admitted she heads to the London Olympic tournament confident, nervous – and proud to be wearing Team GB’s red, white and blue of the Union Jack.

Olga is the only British wrestler competing in the London 2012 Games, and goes in the women’s 55kg competition. She says her desire to pay back the support and faith British Wrestling have invested in her, is as much incentive as she needs to win a medal.

“I have worked so hard to get here and I would be really happy if I won a medal,” she said. “It is what I have been working so hard for, and though the competition will be very tough, I’m confident everything will be fine. I want to be the person that gets British people interested in wrestling.” 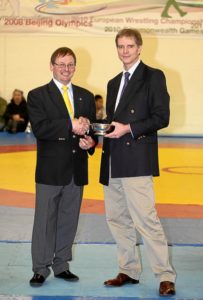 Further encouragement to the wrestling community in Britain, and a role-model to all inside and outside of sport is Dave Sudron, (pictured here receiving an award for 25 years refereeing in wrestling from British Wrestling’s Chief Executive Colin Nicholson).

Dave epitomises the possibilities of volunteering and involvement in the sport beyond wrestling on the mat, having worked through the levels to achieve qualification as a FILA Olympic Level Referee.

Dave will be refereeing throughout London 2012.  Dave recently took part in the torch relay in his home town of Stockton.

If Olga does win a medal, she would become the first British wrestling medallist since Noel Loban in 1984. And she insists it will be every bit a British medal. Olga, who arrived in the UK from Ukraine in 2007, finally became a British citizen earlier this year, and acknowledges the debate that was raised by her, and others like her, representing Team GB.

“People originating from different countries represent Great Britain in all sports,” she said. “It’s normal. I have seen it so many times, not just in wrestling. But I want to give back something – this country has given me the chance to wrestle, I want to respond by delivering a medal, and showing to you it was a good thing to do.”

And she has reason to be confident. Olga was a silver medallist at last year’s Test event in London, though she acknowledges the competition will be much tougher at the Olympics themselves.

“The Test event was a very good competition, and I was delighted to take the silver. But this is the Olympics, and of course it will be very competitive,” she said. 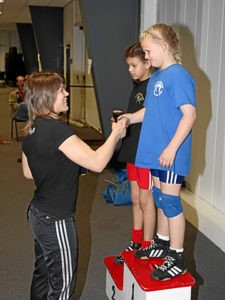 “But I hope that by me having a good Olympics, wresting in Britain would benefit because of it – hopefully the profile the sport gets by being on television will make people appreciate its merits. Wrestling’s a great sport for youngsters, and I would love to think me doing well at the Olympics would help raise interest.”

Olga is the only member of her family who took up wrestling. She was given the option as a 14 year old schoolgirl, gave it a try, and has not looked back.

“No other member of my family do wrestling, but they all support me,” she said. But they will not be able to make it to London to watch her take part in the Olympics. “They are both factory workers, and don’t have passports. But they’re very proud of me, and will be cheering me on on TV.”

And does being the only British wrestler add to the pressure? “Of course it does, obviously. But as I say, I am proud to be representing Britain, and people can be sure that I will be doing my very best to help raise the profile of the sport by doing well at the Games.

“I’m obviously delighted to be there myself, but very disappointed that neither Leon or Yana were able to compete, but I hope they both bounce back stronger, and realise their Olympic dream in four years time. They’re both fantastic wrestlers.”

Olga’s Olympic challenge takes place on August 9 with early rounds in the afternoon – and hopefully continue in the evening, when the 55kg medal matches take place.

Olga on podium at Austrian Open 2011 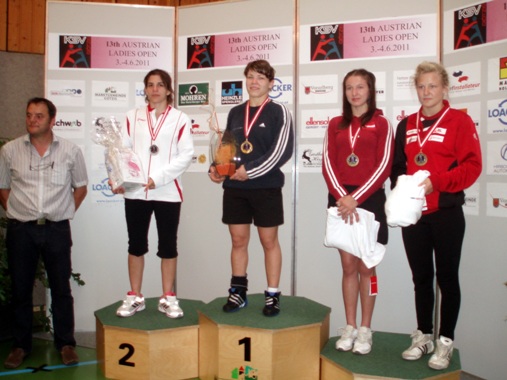