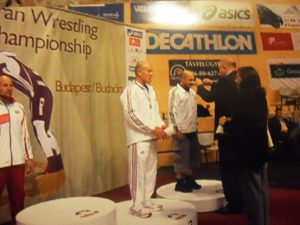 Congratulations to Hossein Azgharyzadegan for achieving Bronze Medal in the 69kg class (Division “D” 51 – 55 years) at the Veteran World Championships in Hungary in September.
Injured in his first bout against Murray Shore (SWE,) Hossein went to hospital.  But he came back to wrestle Russian Artur Konstantinov – who was also injured. Hossein battled hard until the Russian, realising he could not beat Hossein, retired.
Hossein also took part in the 69kg Greco-Roman category where he was defeated by Klaus Mössinger (GER)