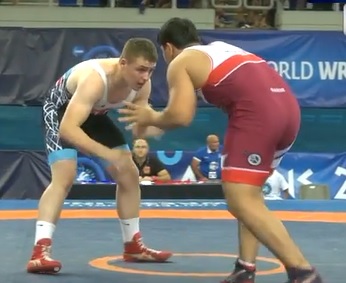 Ben Pollin represented GBR at the Cadet World Championships in the 100kg category on 9th September 2017.


Ben was drawn against Zyyamuhammet Saparov (Turkmenistan) who took one of the Bronze medals in the repechage.
Saparov overcame Ben 10-0 in the 1/8 round, the last two points coming from a successful challenge in the second round.  There was a similar 10-0 margin to Saparov’s next 1/4 match v Kyle Jordon of (CAN).  However, Saparov was then beaten 12-2 by Daniel Kerkvliet (USA), the eventual winner, ruling Ben out of the repechage.  Saparov then went on to defeat Radu Lefter (MDA) by what was becoming his signature 10-0.
Ben was accompanied by coach Barry Pollin, as Anatolii Kharytoniuk was required to be back and the Commonwealth England Wrestling Training event that took place the same day