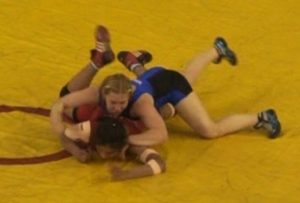 The 2009 Commonwealth Wrestling Championships took place between the 18th and 20th of December in Jalandhar, India, incorporating freestyle, Greco-roman and women’s wrestling competitions.
The tournament was held in the PAP indoor stadium in Jalandhar, with representatives from Cameroon, Nigeria, South Africa, Canada, Pakistan, Singapore, Scotland, England, Northern Ireland, Australia, and New Zealand and of course, India, all present.
Olympic bronze medallist Sushil Kumar of India, along with Justine Bouchard (Canada), 2009 World Championships bronze medallist, and Alka Tomar (India), bronze medal winner in 2006 World Championships, were amongst the competitors, giving an indication of the standard of the tournament.
Congratulations to all those individuals from the home nations who achieved medals in the Commonwealth Championships.  Congratulations also to Scotland’s female wrestling team which collected the cup for 3rd placed team.
Male Freestyle

The England team, led by Team Coach Tony Phillips, comprised of Louisa Salmon, competing at 59Kg, Scott Gregory, 55Kg Freestyle, and Chinu competing at 120Kg freestyle. Scott has picked up gold and bronze medals at international tournaments during 2009, while Louisa was Silver medallist at the British Championships and Chinu British Champion in 2009, so expectations were high going in to the competition.
Louisa led the way on the Saturday, winning a bronze medal, losing out on the way in the semi final to the eventual winner Alka Tomar of India. 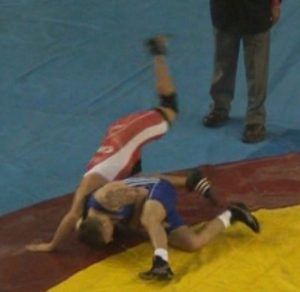 Sunday was the turn of the Men’s freestyle competition. Scott’s final match of the day was to wrestle off for a bronze medal with Canadian Aso Palani. The match went all the way for three rounds, Palani edging it 1-0 in the final round, so a 5th place finish for Scott. 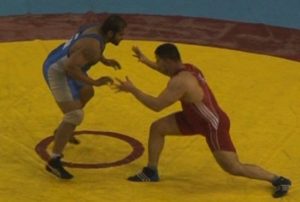 Chinu was given the tough draw of Arjan Bhullar of Canada, losing out in a hard-fought battle, 2-0, 2-0. Bhullar went on to pick up a bronze medal.

Ashlea McManus won silver in the 67 kilogram category and Masoud Yosefi won silver at 84kg, while there were bronze medals for Viorel Etko at 60kg, Donna Robertson at 51kg, and Jayne Clason at 55kg.
Scottish Wrestling President Gerry Malone said: “It was an excellent team performance. All of our wrestlers did well against tough opposition and did Scotland proud.”
end

1. GENERAL INFORMATION
1.1 The 2009 Commonwealth Wrestling Championships will be held in city of JALANDHAR, Punjab, INDIA, hosted by Wrestling Federation of India under the auspices & sanction of the Commonwealth Amateur Wrestling Association and the approval and sanction of FILA & Commonwealth Games Federation.
1.2 The event will be held in Jalandhar sports hall for spectators and has all the necessary facilities for wrestlers, coaches, officials and referees.
1.3 The competition will take place on December 17-20, 2009.

2.1 The Commonwealth Wrestling Championships will be run in accordance with FILA ( NEW ) wrestling rules with some modified Commonwealth Amateur Wrestling Association rules of pool system, team scoring and team compliment.

The 2009 – Commonwealth Championships are for SENIORS 20 years and older. Wrestlers in the junior age (18yrs.) category are allowed to participate in the competition for seniors. However, wrestlers aged 18yrs. of age in the year concerned (competition ) must provide a medical certificate and parental authorisation.
2.3 The weigh-in will be one day before the competitions (December 17th, 2009 ) in accordance with the Rules and Regulations.
2.4 No tolerance of weight will be allowed.
2.5 The competition format will be a modified Pool system, A & B pools with all athletes wrestling each other within each pool in Preliminary phase. Top 3 wrestlers from each pool will go on to wrestle in quoter- final, semi – final and finals for the classification 1 – 6 th place.

3. ELIGIBILITY FOR PARTICIPATION
3.1 Participation in the 2009 – Commonwealth Wrestling Championships is open to all Commonwealth nations recognized by COMMONWEALTH GAMES FEDERATION and provided that their wrestling governing bodies are members in good standing with the Commonwealth Amateur Wrestling Association and FILA.

3.2 The membership cost to be a member of the Commonwealth Amateur Wrestling Association by the individual Commonwealth Wrestling Nation is one hundred and fifty ( $ 150.00 ) US dollars for a two (2) year period ( 2009 & 2010 ).

3.3 Entry fee for the 2009 – Commonwealth Wrestling Championships is one hundred ( $ 100.00 ) US dollars/per wrestler/per style. This fee is to be paid to the – Commonwealth Amateur Wrestling Association (cash or traveler’s cheque) at the time of arrival and registration.

3.4 All competitors must produce their valid FILA licence to compete. The competitor’s FILA licence can also be purchased from FILA representative at the registration time or prior to the start of 2009 Commonwealth Wrestling Championships.
4. OFFICIATING

4.1 Referees belonging to the International category ( FILA) shall officiate at the 2009 – Commonwealth Wrestling Championships. Referees must produce their valid FILA licence.
More information on Commonwealth website