27 Nov 2009
On Friday 27th and Saturday 28th November 2009, the annual Henri Deglane Tournament was held in Nice, France. A total of 24 countries competed in the tournament including a team of four athletes from Great Britain namely Yana Rattigan (Female 48kgs) , Krasimir Krastanov (55kgs), Jatinder Rakhra (60kgs) and Leon Rattigan (96kgs).
The results were as follows: 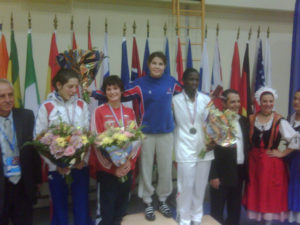 1st Round vs RUSSIA – won on points
2nd Round vs SLOVAKIA – won on points
Final vs SENEGAL – won by fall
Final Placing – 1st
This was an excellent performance by Yana who beat the current Junior European Champion from Russia in the first round and also the European Junior Bronze medallist in the second round, an athlete that beat Yana last year in the same tournament.
Krasimir Krastanov (55kgs)
1st Round vs ITALY – won by fall
2nd Round vs ROMANIA – won by points
Final vs SENEGAL – lost on points
Fianl placing – 2nd
Jatinder Rakhra (60kgs)
1st Round vs SLOVAKIA – lost on points
Leon Rattigan (96kgs)
1st Round vs FRANCE – lost on points
The Performance Director Shaun Morley said “This was a good tournament with an excellent standard of competition. Some of our athletes were clearly still suffering from the effects of a recent flu virus but Yana put in an excellent performance and not only beat two world class athletes but was totally dominated her opponents. She will certaiunly be one to watch next year.”