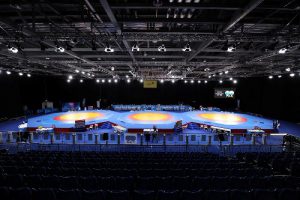 55kgs – Krasimir Krastanov
‘v’ USA: Lost: 0-3; 0-1 (link)
Repechage
‘v’ China: Won: 2-0; 3-2 (link) Bronze
Krasimir wrestled 3-0 in the first round against a strong American, Escobedo, after getting caught in a throw. Krasimir was unlucky to lose a point in the last second of the second round. His US opponent was simply physically stronger which was the only difference in the match. Krasimir’s performance took him into the repechage. (link)
In the repechage against a Chinese opponent, Qi, Krasimir put on a very dominant performance, both tactically and technically. Krasimir scored some excellently executed leg attacks in both rounds to take the Bronze medal 2-0, 3-2 (link).
60kgs – Sasha Madyarchyk
‘v’ Japan: Lost: 1-3; 7-1; 3-0 (link) 6/6
Saha fought Suzuki from Japan. Sasha lost 3:1 in first round in an even contest. Sasha then scored freely through the second round, winning 7-1. However, Sasha was still not quite back at competition fitness which was evident in 3rd round where he lost 2-0.

66kgs – Bec-khan Aldamov
‘v’ Russia Bye
‘v’ Japan Lost: 0-1 5-2 (link)
Repechage
‘v’ Mongolia Won: 3-0; 5-0 (link) Bronze/6
Bec-khan had a bye in first round. In the semi-finals, he wrestled Tanaka from Japan. It was a close match. Tactically, Bec-khan wrestled well, coming out the narrow loser on points. But he equipped himself in a positive fashion.
In the repechage, Bec-khan gave a good controlled performance in which he took his opportunities well and executed a good high altitude throw to score a 5 point move which ended the contest.
For his first outing in international competition, Bec-kham approached the matches mentally, tactically and technically very well and he can hopefully build on this experience for future.

74kgs – Philip Roberts
‘v’ France Lost: 0-1; 0-6 (link) 8/8
Philip fought Lampis from France – a very strong and experienced opponent but who was clearly evenly matched.  However, Lampis was able to score successfully in both rounds and ran out as the narrow points winner.
Philip needs to concentrate on developing the offensive part of his tactical approach and a competition and training structure will be put together for him to work on this successfully.
Men’s Freestyle
84kgs – Jamshid Yarashev – withdrew
96kgs – Leon Rattigan – withdrew
120kgs – Mark Cocker – withdrew
Greco Roman
66kgs – Myroslav Dykun – withdrew
Women’s Freestyle
48kgs – Yana Rattigan
‘v’ Sweden: Lost:0-3; 0-2 (link) 9/9
Yana was recovering from a viral infection and clearly under the weather. Yana lost to Jeppsson that she beat very comfortably only eight weeks previously.

55kgs – Olga Butkevych
‘v’ Azerbaijan: Won: 5-1; 4-0 (link)
‘v’ Russia: Won: 3-0; 5-0 (link)
‘v’ Sweden Lost: 1-4; 0-2 (link) Silver/9
Olga’s first opponent was Ratkevich from Azerbaijan, the current World and European champion at 59kg. Olga lost to her in the semi-finals of the Europeans. (Both dropped to 55kg). At the Test Event Olga gave a positive performance and dominated the match throughout.
In the semi-finals Olga met Ologonova of Russia. Olga was focused and controlled the match throughout. Olga was technically superior to Ologonova and a comfortable points winner – not conceding a point.
In the final, Olga lost to Mattsson of Sweden – a very good and technically quick opponent. Mattsson scored in both 1st and 2nd rounds with single leg attacks and that was the difference between the two. This was a match that Olga will have to review over the winter months and learn from the experience if she is to progress to a medal position in the global championships next year.
63kgs – Sarah Connolly
‘v’ Korea: Lost 0-5 (link) 8/9
Against Choe of Korea, Sarah succumbed to a pin in the first round. This was a good opportunity for Sarah to experience the level towards which she needs to develop. Sarah can use the match as a learning experience to move forward in terms of developing strength and technical ability.

72kgs – Chloe Spiteri
‘v’ Russia: Lost: 0-6; 0-6 (link)
Repechage
‘v’ Norway: Lost: 0-8; 0-4 (link)
In her first match, Chloe wrestled an experienced & strong Russian opponent, Bukina. This was one of Chloe’s first exposures to world class competition. For competition at this level Chloe needs to concentrate on strength, cardiovascular fitness and her technical and tactical capability.
In the repechage Chloe met Erlandsen from Norway and lost to a pin in the second round.
Chloe is possibly to small for the 67 & 72 kg categories and could consider moving down to the 63kg category.