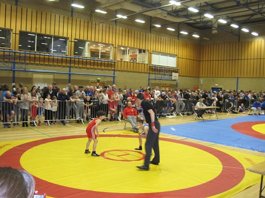 265 entrants from 24 clubs took part in the inaugural tournament of Aspull Warriors, a club established in 2015. 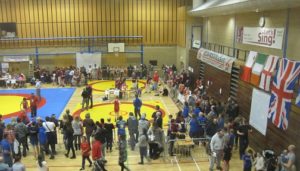 Entrants from all Home Nations, Malta and Holland descended on Robin Park Arena, Wigan for the tournament with a late surge in entrants that led to four mats in use, concurrently, at some parts of the day.

Thanks should be extended to athletes, parents and club coordinators for making the journey, which in many cases entailed an overnight stay (in some cases two!).

Especial thanks has to go to the organising team of Aspull Warriors, their many volunteers, and particularly the referees and officials who worked long hours with little break. 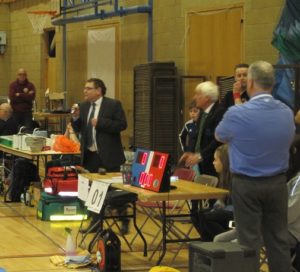 The event was opened by Councillor Ready, local councillor for Aspull and Cabinet Member of Wigan Council.

Councillor Ready has been a steadfast supporter of Wrestling over many years.  His cabinet portfolio is Communities and Housing with a remit that includes building Self Reliance and Strengthening Communities, both themes with which the sport of wrestling would identify.

The Aspull Warriors organising committee brought together a wide range of sponsors who helped make the competition financially viable and these sponsors deserve a big thank you. They were highlighted in a high quality tournament programme produced for the day.