Barton Athletic Club, in the City of Salford, was successful in its bid to Sports England’s Improvement Fund towards the overall project costs of £750,000.
12 years ago there was the “Save the Barton AC Campaign” a petition signed by 7,000 people, launched after the club lost its home of 30 years – Eccles Drill Hall. Ever since then, the Club Committee have worked tirelessly to achieve the vision of a permanent multi-purpose sports facility. 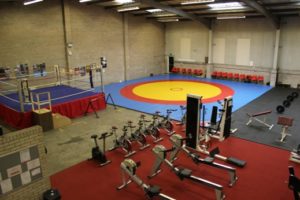 Barton Athletics Club was founded in 1953 by Max Shacklady, ABA Boxing Champion and Olympian. Max’s son Tony, wrestled in three Olympic Games (1968 Mexico; 1972 Munich; 1976 Montreal) and won Silver at the 1974 Commonwealth Games in Christchurch, New Zealand. Tony was a National Coach for British Wrestling including as GB Team Manager at the 1992 Olympics in Barcelona.

Since its founding, the club has had seven homes and is now delighted to have a permanent home for the next 99 years.

Since the start of the bid, Barton AC and other funding agencies have contributed and fundraised a further £209,000. In excess of 62,000 hours of unpaid volunteer time over twelve years have enabled the project to be successful.

Barton AC would like to thank all the participants who have given freely of their time in this process, including the support of the respective National Governing Bodies: England Boxing, British Wrestling, British Weightlifting, England Athletics.

Said John Lightfoot, treasurer, “Thank you all for your help and assistance over many years. This has enabled Barton AC to achieve its goal of a new multi-purpose sports facility.”
Colin Nicholson, Chief Executive of British Wrestling, said: “It has been inspiring to see the dedication of volunteers with a vision being rewarded with significant investment by Sport England. I wish Barton AC a long and successful future.”

Colin Nicholson, Malcolm Morley (previous Chair of British Wrestling) and Yvonne Ball visited the proposed site for the new-build in November 2010 and made representations in London to Sport England that same month. Colin Nicholson and Jem Lawson, (British Wrestling’s new Chair) visited in December 2015 and were briefed on bid progress during a site tour.

Sport England Property Director Charles Johnston said: “We know people have a better experience of sport when they have good facilities in which to play. This is why we’re investing in Barton AC to help build new facilities, so they are more appealing to young people, and help us to get them developing a lifelong sporting habit.”

Salford City Mayor, Ian Stewart said: “This funding announcement is fantastic news. Lots of people have worked hard behind the scenes for many years to keep the club running and secure this funding. They deserve to be publically congratulated. I look forward to visiting again to see the positive impact it is having in our community.”

The bid was made possible with the help of Sport England, City of Salford, Boys and Girls Clubs of Greater Manchester, Greater Sport, Eccles and Irlam Neighbourhood Management Team, Salford Sports Network, Salford CVS and the four National Governing Bodies of Sport (NGBs).

The brand new multi-sports facility will be located on Franklin Street, in the Barton ward of the City of Salford. The new Club will provide the following sports – Boxing, Wrestling, Weightlifting, and Road Running, as well as facilitating multi-sport and general fitness sessions.

John Lightfoot served on England’s Commonwealth Games Council for 12 years, championed Manchester 2002 Commonwealth Games and is an ex-Chair and Treasurer of the BWA. Said John, “A new horizon now awaits Barton AC enabled by this funding stream from Sport England. Our club will remain as a community hub within Barton and Eccles for years to come. The club will serve the community for generations in the future.”