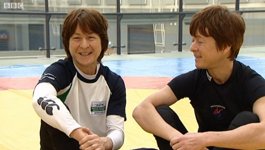 As part of its wide-ranging coverage across sports and athletes, raising awareness of the Glasgow 2014 Commonwealth Games, the BBC spent some very useful time with Donna and Fiona Robertson.

Donna and Fiona are both previous Commonwealth Games Bronze medalist but in Judo: Donna in Auckland, New Zealand 1990 and Fiona in Manchester, 2002.
BBC Scotland’s reporter Chris McLaughlin explores their dreams for the Glasgow 2014 Commonwealth Games