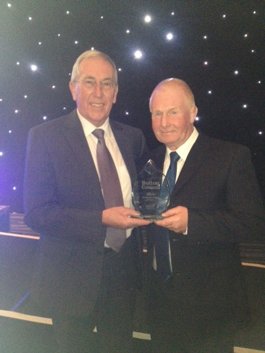 The awards celebrate the dedication and commitment of all Bolton’s Sporting Heroes.

Tony remains “on cloud 9,” after this entirely unexpected honour and the award was followed-up with a family ‘Congratulations party’ yesterday.

Bolton Council organised the event which was held on Friday 26th September in the Premier Suite at the Bolton White Hotel in the Macron Stadium.

Special guest ex-Bolton Wanderers Footballer, Tony Kelly, gave an after dinner speech followed by the award ceremony.
Tony was nominated by Bolton Wrestling Club for the Unsung Hero Award. There were 10 nominations on the evening from different sports and Tony was voted Unsung Hero 2014. 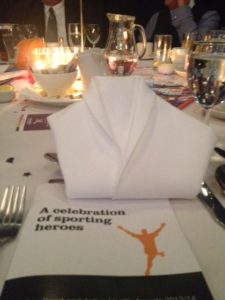 Tony devoted over 50 years to wrestling in Bolton, which included 36 years as a volunteer coach at Bolton Olympic Wrestling Club. He also coached over a a 25 year period as Northern Region Coach and 17 years as a British National Coach.

Tony dedicated a lifetime of coaching to all age groups and possesses the leadership skills that have helped countless people to have a positive outlook on life.

And alongside coaching athletes, Tony has also provided peer support to many young coaches.
The award is a wonderful recognition for all his voluntary work.