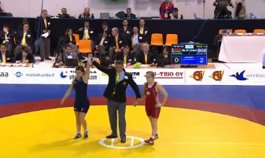 Olga Butkevych (GBR) pinned her first and last opponents in the 2014 European Championships to take Bronze.

In the repechage, it took Olga just 18 seconds to triumph.  Olga overcame wrestlers from Roumania and Belarus. 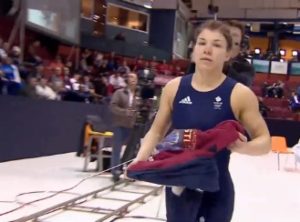 Olga has had to take time out from Wrestling since her 2012 World Championship Bronze (59kg, Sept 2012, Canada) to earn a living.

Just two months after that 2012 World Championship Bronze, in their 2013-17 funding review, UK Sport chose not to fund her bid for a similar podium place in the 2016 Rio Olympics. 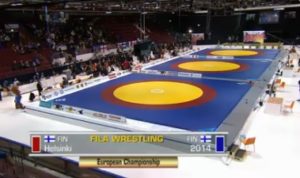 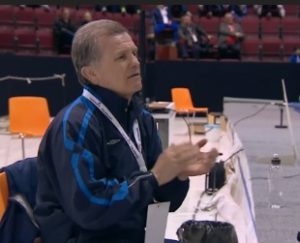 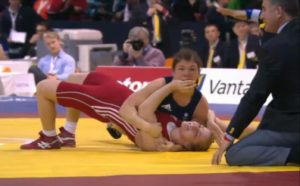 With Hafize Sahin being a finalist, Olga entered the repechage to contest one of the two Bronze medals – against Nadeshda Mikhalkova of Belarus [2012 European Championships 5th placed].

Olga pinned Mikhalkova in just 18 seconds! In the FILA report’s words “Olga BUTKEVICH (GBR), 2012 world bronze medalist, ran over a takedown attempt by Nadezhda MIKHALOVA (BLR) and pressed for the fall only 18 seconds into the bronze medal final.”

Said Olga after her victory, “It’s been a tough journey what with loosing UK Sport funding, but thankfully the National Lottery, this time though Sport England and Commonwealth Games England, came to the rescue and funded my recent training to a limited extent and I am pleased to have demonstrated I can deliver. Now for Glasgow!”
“I am so glad for Olga” said British Wrestling Chief Executive Colin Nicholson.

“She had big decisions to make as to whether to try to come back without UK Sport funding.

“She pinned two of her opponents on her way to Bronze. Good luck to her in her quest for Gold at the Commonwealth Games.

“Then the even bigger decision on whether to take the road to Rio when she has demonstrated yet again that she has Olympic podium potential.”