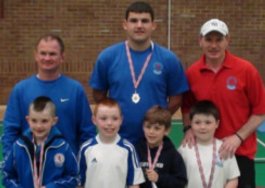 On Saturday, 16th June the British Novices took place at Thornaby Pavilion, Stockton.  The competition was well run – both starting and finishing on time.

Said Dave Sudron, tournament organiser, “it was a good opportunity for young wrestlers of the future to compete in a national competition.  I encourage even more coaches to bring their novice wrestlers to the novice event in 2013.”

Dave also described how beneficial it had been to use on-line registration for the event.  “It saved lots of volunteer organiser time as the system automatically checks that those registering are members, saving embarrassment of would-be wrestlers being turned away on the day – On-line, every time, saves time!”

Dave’s own Stockton Wrestling Club had a most successful day with 20 medals achieved by 22 participants.

One club making the distance was Tryst Lions, all the way from Cumbernauld, Scotland, (pictured above).  A new generation of Tryst Lions wrestlers earned glory at the championships.

Tryst Lions also gained good coverage of their participation in their local newspaper the Cumbernauld News (link)
A group of young wrestlers competed for the Lions and a variety of medals were racked up by the team with Ciaran Keelan bringing home silver, Ruban Gray and Shaun McDonald winning bronze while Ewan McCormack and Joe McCluskey placed 4th. Cameron McKay also claimed silver in the senior category.