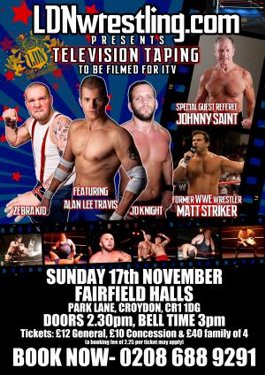 28 years after ITV last screened the hugely popular World of Sport entertainment, LDN staged Sunday’s event – filmed for ITV and watched by a large and vocal Croydon audience. One of the fights was refereed by Johnny Saint, a legend of British Pro-Wrestling.

Interaction between participants and spectators was a significant part of the event, but there was also a serious message for amateur, Olympic-style, wrestlers.
Frank Rimer, British Wrestling Reunion organiser and founder of the Dropkixx Pro-Wrestling Academy, brought together at the event many of the heroes and legends from across the years of pro-wrestling. Many of the heroes had come up through the route of amateur Olympic-style wrestling now driven forward by the British Wrestling Association.  The heroes appeared together in the ring for a presentation. 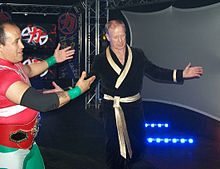 After recognising each hero in turn, Frank presented Johnny Saint, known as “the man of 1000 holds,” with a plaque in recognition of his world-wide achievements across an unparalleled 53 years, from 1958-2011 (Wikipedia link)

It was very apparent that many the youthful members of the audience were only too keen to get on the mat and get the chance to learn the foundation skills of Freestyle wrestling.

There was an appetite amongst the spectators for more young people to get make a start in the amateur sport and grow to represent the Home Nations and GBR in the Commonwealth Games and the Olympics, particularly now that the International Olympic Committee has voted Wrestling back into the Olympics through to 2024 (link).

With a clear acknowledgement that the Olympic, amateur styles of Freestyle and Greco Roman wrestling are foundation skills that would benefit young people, (e.g. developing their sporting skills and confidence) the British Wrestling Association needs to continue to build participation in the sport in partnership with Sport England and other supportive groups like Frank Rimer’s British Wrestling Reunion.