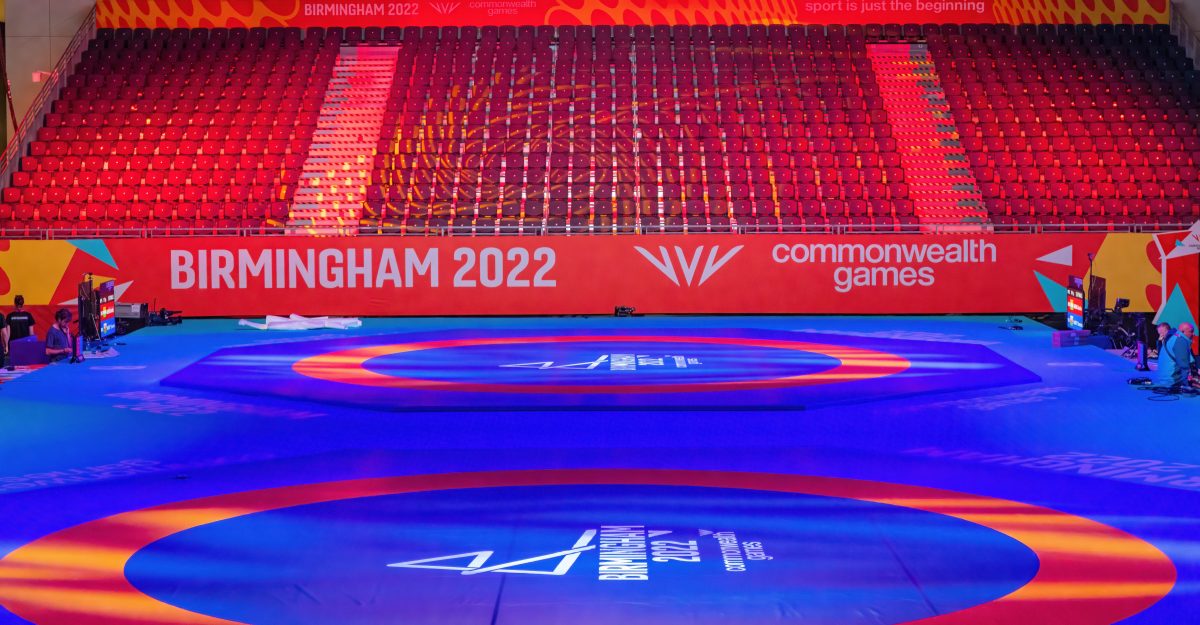 That’s it, it’s over. The Birmingham 2022 Commonwealth Games have come to a close in a huge celebration at Alexander Stadium.

The Wrestling took place at Coventry Arena over two action-packed days where the sell-out crowds kept the medal sessions bouncing all night.

British Wrestling sent a total of 17 athletes to the Games, filling all team sports granted by the Home Nation Commonwealth Games Associations. Team England had 9 athletes, unfortunately, Chloe Spiteri was withdrawn from the competition on medical grounds, Team Scotland had 6 athletes and Team Wales had 2 athletes.

Over the two days, England secured three Bronze medals. The first coming for George Ramm in the 65kg, defeating Lowe BINGHAM (NRU), 11-0. This was George’s third Games but the first medal. George has since announced his retirement from international wrestling and we wish him all the best and will work with him to ensure that his experience and expertise remain in the sport.

The second medal of the Games came to a debutant, Mandhir Kooner at 125kg. Mandhir exploded onto the domestic scene after the pandemic with victory at the UK Seniors in October followed up by a gold medal at the English Seniors in February earning him a place on the England team. Mandhir continued his development winning by fall in his Bronze medal match against Kensley MARIE (MAU).

There was then a wait for the third medal not coming until the last but one category on Saturday evening. Georgina Nelthorpe, WW76kg, delivered a devastating performance in her bronze medal match to defeat Madusu KOROMA (SLE), via fall in just 23 seconds. Georgina backed up her Bronze from Gold Coast 2018 with another medal and is now looking forward to Paris 2024.

Overall the Home Nations entered 16 athletes into the 2022 Birmingham Commonwealth Games below are the final standings for all athletes.

For a full write-up of the competition please visit the Birmingham 2022 website:

British Wrestling was well represented on and off the mat by our officials who were crucial to the delivery of the event in all aspects.

UWW Category 2 Officials Lee Seggl and Richard Phillips were British Wrestling’s representatives on the mat. Both officiated a number of medal matches across the two days of competition.

BWA’s Chief Medical Officer acted as one of two competition doctors for the event. Working alongside Dr Shadgan, Head of the UWW Medical Commission, Dr Saam Falahati provided medical cover for all athletes.

Special thanks to British Wrestling Board Member and Welsh Wrestling Association Secretary, Ian Wiggett, for being part of the Birmingham 2022 Organising Committee linking UWW and BWA to the organisation of the Games.

The Birmingham 2022 Commonwealth Games was a historic first. The first time that a UWW competition has been officiated by more female officials than male. The standard of officiating was incredibly high and hopefully an inspiration to a huge number of young women out there to get involved in wrestling be that competing or officiating. Want to get into officiating? Check out our pathway for all the details.