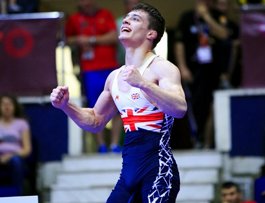 Competing on the Saturday, at 60kg, George’s first match was against Riad Redjepi of Macedonia. George beat Redjepi with a nice 0-10 win. 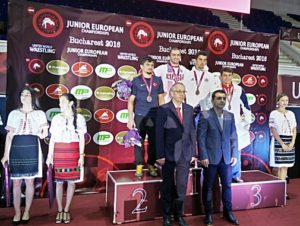 In the quarter-finals against Djakhar Gamboulatov of Belarus, George took the match also to 0-10.

George then came up against Uruzbek Tsomartov of Russia, the ultimate Gold medal winner (in a match against Selim Kozan of Turkey). Russian athletes won all four Gold medals available on day 1 of the European Juniors with a clean sweep.

George lost this semi-final match 0-11, but went through to the repechage where he defeated Poland’s Patryk Oleczyn. 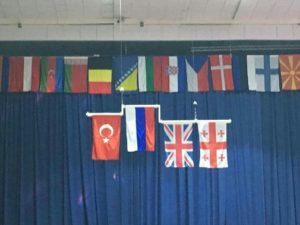 “Everybody at Sharples wrestling club are absolutely delighted that George has won a Bronze medal in the 2016 European Junior Championships,” said Eddy Kavanagh, Wrestling Development Officer, Sharples Wrestling Club and England Wrestling Team Leader for Gold Coast 2018.  “He is a very dedicated young man and this is nothing more than he deserves. This is fantastic achievement given his positive attitude and I am sure there is a lot more to come from him in the near future”
– – – – 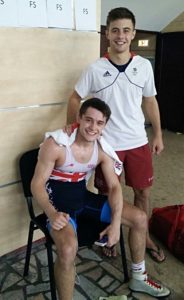 Competing on the Sunday, at 66kg, was Charlie Bowling. Unfortunately, Charlie was defeated by Marc Dietsche of Switzerland, 6-4.

Later, Dietsche lost to eventual Gold medalist David Baev of Russia 2-12, which took Dietsche to the repechage where he won against Constantin of Romania before being defeated in the Bronze medal match by Sulava of Georgia.

Charlie Bowling was not far off that place in the Bronze medal match.
– – – –

BUCHAREST (June 25) – Bolton native George RAMM (GBR) is a devoted fan of local football club, The Wanderers, so it may be more than fitting that this “wanderer” has been on the road most of the last nine months in search of wrestling success.

On Saturday, Ramm got a taste of international success when he claimed Britain’s first-ever medal at the European junior wrestling championships with a win in the bronze medal finals at 60kg.

Ramm explained that he and coach Anatolii KHARITONYUK (GBR) have been traveling around Europe since last September for training and competition in places like Ukraine and Germany. In February, Ramm earned a fifth place in the prestigious Ukraine International. 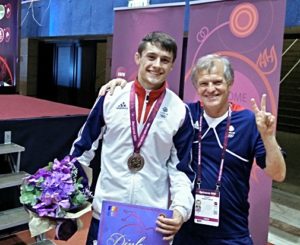 Asked about his low-level leg attack which resembles the likes of Olympic Games gold medalists John SMITH (USA) and Jordan BURROUGHS (USA), Ramm is quick to correct that impression: “It’s all Anatolii.”

He explained that 1975 world silver medalist Kharitonyuk for the now-defunct Soviet Union taught him some different angles of attack for the low-single that make the technique different from the Americans and “more effective for me.”

Earlier in the day, Ramm racked up a pair of technical falls on the strength of his low single and its variations, but could not get it going against eventual gold medalist Uruzbek TSOMARTOV (RUS), falling by technical fall.

In the bronze medal final, Patryk OLENCZYN (POL) tried to control Ramm with strong tie-ups to prevent any low-level attacks, but Ramm dumped his opponent to the back for four points in the first period and then played cat-and-mouse in the second for the 9-4 win.