Bronze Medal in The Balkans 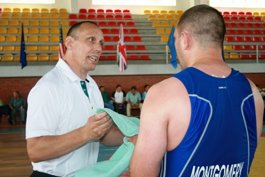 The senior Northern Ireland wrestling team were recently invited to enter the Macedonian Pearl FILA Tournament in Stip, Macedonia and a smaller event in Suva Reka, Kosovo where they achieved mixed success. Mark Montgomery took a bronze in the local competition where once again the going was very tough.

Wrestlers from across Northern Ireland have been travelling to the region to work with quality partners and enter high level tournaments.

One such wrestler, Mark, has just been selected to represent Northern Ireland in the Commonwealth Games in Delhi, India from 3-14 October 2010.  Returning from a 10 day training camp in Kosovo, Mark said, “The opportunity of practice with top athletes in that environment is central to my preparations for the Games, I have to work extremely hard to keep up with those guys and they have a way of bringing out the best in our wrestlers”

This level of international wrestling cooperation has been brought about by Barry Pollin from the Waterside Sharks Takedown Club who is embedded with the coaching staff of the Hidroizolimi Shala Wrestling Club, Kosovo.

Barry is currently developing his skills and abilities in the heartland of the sport in the Western Balkans. Through his new network of contacts, Barry has been able to provide technical support and advice to the current senior Northern Ireland team.