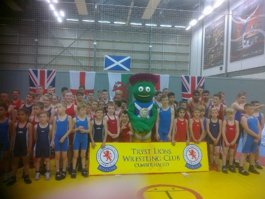 The 85 competitors that took part in the Tryst Open were met by an extra special guest!

The highlight of the day was a visit from Clyde the Glasgow 2014 Games Mascot who proved to be a prickly character!
For results follow the link (link) 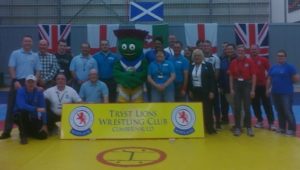 The Tryst Open was also the venue for a pairing course taken by Ellen Morris. Five attendees learnt the vital art of pairing, central to the successful organisation of any competition. Competition officials and course attendees also got a chance to meet Clyde.

Earlier in the year, Lee McKeown, Nathan Ferguson and Steve McKeown had met up with Clyde (who was busy and was represented by a stand-in!) and Moira Lassen, Glasgow 2014 Competition Manager. 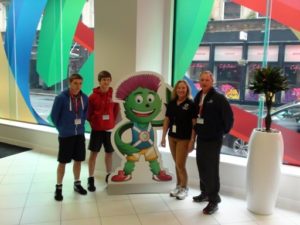 They had just delivered a “Snack Size Sport session” with Steve McKeown as coach/referee/colour commentator and Lee & Nathan as the athletes. The audience of Glasgow 2014 personnel loved the detail Steve provided and his passionate delivery and they thought it was great seeing Lee and Nathan execute the moves Steve was describing.

The athletes were decked out in their singlet’s entering the field of play with accompanying music (ACDC Back in Black) complete with sign bearers and basket carriers; a simulated challenge (with sponge being tossed on the ‘mat’ and video replay); the athletes had coaches, water, towels and spit buckets in their corners and at the end of the demo had to walk through the Mixed Zone, answer media questions from Host Broadcast, Rights Holders, Radio and Press and one athlete was even ‘tagged’ by doping control.

Then the audience had some time to ask questions and after all three spoke to the internal Press Operations officer. The sport of Wrestling was represented well and there were great compliments regarding the explanation and the passion of individuals.