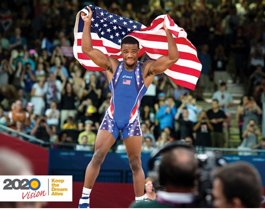 The campaign has the same mission as CPOW, “to ensure that wrestling remains as a core sport of the Olympic Games.”

The 2020 Vision marketing program has some specific objectives. Among the key objectives are to gain 2,020,000 people to sign up to support the Keep Olympic Wrestling effort, as well as to solicit donations, and help build and expand the sport of wrestling in the United States and around the world.

The campaign logo features an Olympic style mat which doubles as a target. Keep the Dream Alive is the tagline.
Olympic champion Jordan Burroughs is featured in some of the prominent materials, but there is an ability to also include other kinds of wrestling images to touch upon all levels of the wrestling experience.

“We really like the focus of the campaign, which captures the essence of our effort,” said CPOW chairman Bill Scherr, an Olympic medalist and World champion wrestler. “The campaign serves as a rallying point under one mission both in the United States and around the world.”

“The tagline speaks to the dreams of all wrestlers, from kids up through top Olympic hopefuls. The Olympic dream lives in every wrestler, not just in the United States, but also around the world. This campaign will allow us to preserve the dream for future generations, ” said USA Wrestling Executive Director Rich Bender.

The 2020 Vision campaign touches upon a number of media platforms, including a website, twitter feed and Facebook page. The campaign includes banners, print and digital collateral, several TV/web PSAs (including some to famous celebrities) as well as kits to participating organizations.

Campaign
The campaign was created by KOM Sports Marketing of Colorado Springs.

About CPOW
The Committee for the Preservation of Olympic Wrestling (CPOW) was developed by USA Wrestling, whose mission is to insure that wrestling remains as a core sport of the Olympic Games. CPOW features many highly-respected leaders within the American wrestling, chaired by Bill Scherr of Glenview, Ill., a World champion and Olympic medalist in freestyle wrestling and a leader in the Olympic family.

With thanks to the FILA News page