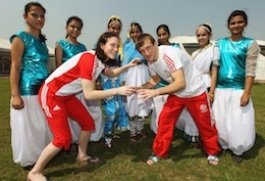 Glasgow 2014 Commonwealth Games Wrestling will take place in the Scottish Exhibition Conference Centre and feature both Greco-Roman and Freestyle disciplines.

The SECC will serve as the largest precinct venue for the Games. It will host several sports, including Gymnastics, Judo, Netball, Wrestling and Weightlifting/Powerlifting as well as the venues of the International Broadcast Centre and the Main Press Centre.

The SECC campus, which already boasts large-scale SECC Exhibition Halls and the famous Clyde Auditorium (known as the ‘ Armadillo’ due to its cascading, shell like shape) will also see the addition of the new Scottish National Arena
(Copy from Commonwealth Games England website)