Cornish Wrestling ‘Gets to Grips’ with New Youth Programme 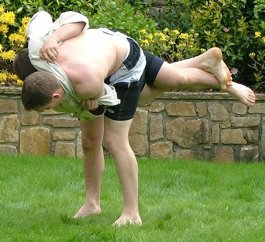 The ancient sport of Cornish Wrestling is set for a resurgence across Cornwall thanks to a grant of £9,000 from Sport England. Youngsters will be able to try out the traditional style of Cornish wrestling with taster sessions in schools and get more formal coaching in wrestling clubs.

The Cornish Wrestling Association (CWA) received the grant earlier this year and will launch the first wrestling sessions at Penair School in Truro in January. This will be followed by sessions in other schools around Cornwall. Qualified coaches will be on hand to help supervise the activities.

The Association hopes that the grant will help see a surge in numbers taking part in wrestling which had been in decline over the last few years. Mike Cawley, Chair of the CWA, said: “It’s fantastic that Sport England is supporting Cornish Wrestling.

“150 years ago everyone in Cornwall wrestled and this project is a stepping stone towards bringing it back to popularity.
“Youngsters will get to see how much fun is involved and also get to grips with some of the history and tradition of the sport.”

The grant was welcomed by Councillor Bert Biscoe who backed the bid. Bert said: “I am glad to see the Cornish Wrestling Association receiving a grant from Sport England to encourage wider participation and the ‘handing on’ of skills and knowledge about Cornish wrestling.

“The CWA’s ambition to engage with schools through a supported coaching scheme is most important.”
The project, called Gwary Whek Yu Gwary Tek – the historic Cornish wrestlers motto meaning ‘good play is fair play’ – aims to encourage more young people to take up the sport. The CWA is also planning an inter-schools competition and in the long-term hopes to develop more clubs across Cornwall.

Mike Cawley added: “Wrestling has been taught in Cornwall hands-on through the mists of time. This grant will enable us to keep that tradition alive.”
Cornish wrestling is Cornwall’s oldest and national sport. It is an unbroken tradition passed down from father to son. Competitors aim to throw their opponent onto their back from a standing position with a variety of unique throws.

If you want to get involved, or you belong to a school that wants to take part visit: www.cornishwrestling.co.uk.