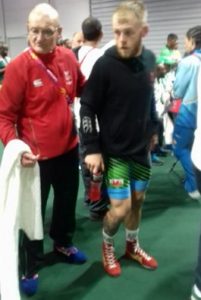 Kane Charig (WAL) will wrestle for gold.  This assures Wales of its first Wrestling finals appearance in Commonwealth Games history and thus its best result ever.

For England, Charlie Bowling is through to the Bronze medal match.

Sarah won her next match against Noellancia Genave (MRI) with a Pin, but in her last match was pinned herself in a loss against Tiako Joseph Essombe (CMR).

Leon RATTIGAN (ENG) 97kg:
Jordan STEEN (CAN) upset two-time Commonwealth Games bronze medalist Leon RATTIGAN (ENG), 10-0 in round number one.  Then Martin ERASMUS (RSA) continued his domination of the 97kg weight class, beating Steen, 12-2, so there was no way through to the repechage for Leon.

Joe Samuel HENDRY (SCO) 97kg:
Nicolaas VERREYNNE (AUS) brought the home crowd to their feet as he picks up a fall over Joe with final score, by VFA, 5 – 0.  However, Verreynne was then defeated by Martin ERASMUS (RSA) who went on to win Gold, leaving no way through to the repechage.

Kane Daniel CHARIG (WAL) 65kg:
In his first match, Kane defeated Charlie James BOWLING (ENG)
by VSU, 10 – 0.  In his second match, Kane went on to defeat Jean Guyliane Joris BANDOU (MRI), also by VSU, 10 – 0.  In the Gold medal match Kane will be up against Bajrang BAJRANG (IND), silver medallist in the 2017 U23 World Championships and Glasgow 2014 Commonwealth Games.

Charlie James BOWLING (ENG) 65kg:
As above, Charlie was defeated by Kane Charig in the quarter-finals.  Going to the repechage and Bronze medal match, Charlie is up against Jean Guyliane Joris BANDOU (MRI).