Development Squads on the road 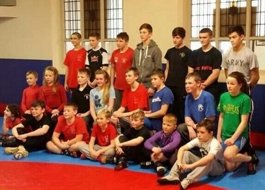 Jesse and the North led the way – launching the session with the full support of the Northern Region Committee in under a month since the official announcements of Regional Coach appointments (link) on 18th December, with planning across the holiday period.

24 wrestlers took to the mat and enjoyed a successful session led by Jesse and many Club Coaches supporting.  The picture was taken at the end of the session.

The athletes will be working towards the standard testing protocols, laid out in the England Talent Pathway documentation, with a great result leading to a longer term place on the squad
Said Regional Coach Jesse, “It was a great turnout and a great effort by all! The Northern Region up & running.”
Jesse continued, “Great motivation for our kids and it encourages them to train hard to become national champions and to gain a place on the National Talent Squad.”

Tomorrow (Sunday 12th January) the South’s Regional Coach, Eric Ciake, will undertake initial selections at a Southern Regional grassroots training event in Slough.  The Midlands too are in action with their first squad timetabled for tomorrow.

Thanks to British Wrestling and Sport England for the Talent Pathway funding that supported the session and also to Jesse, the athletes, their parents and volunteers that made the session possible.