England Training – another Academy session with Physio and S&C 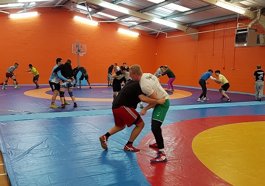 The England Wrestling Team held another session at the Wrestling Academy on Saturday 21st January.
The session was led by Anatolii Kharytoniuk, England National Coach.
20 athletes participated, coming from the three Regions, North, South and Midland.

Giving significantly added value to the sessions, 3 physio students attended from Bolton University to administer physio to the athletes at the break after the end of morning practice. 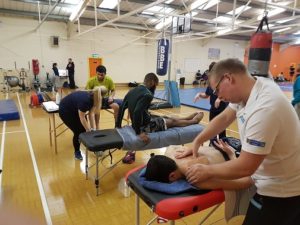 The availability of treatment by the Bolton physios was made significant use of and was much appreciated by the athletes.

This was a S&C workshop specifically tailored towards wrestlers. The workshop was very informative and covered what a wrestler should know about lifting in and out of competition, lift training plans, overtraining and plyometric exercise.

The next squad session is scheduled for Saturday 11th Feb at the Wrestling Academy Salford.