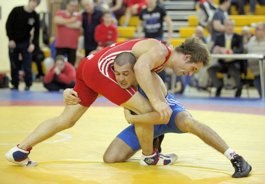 The top wrestlers from all over the UK took part in the national senior championships at North Solihull Sports Centre, in Chelmsley Wood.

Some were hoping to boost their chances of representing one of the Home Countries at this year’s Commonwealth Games in Glasgow, while others are looking further ahead, to the Olympic Games in Rio in two years time. 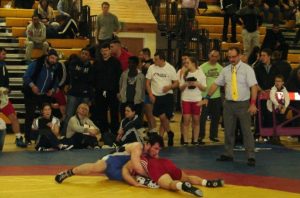 “This is the first time we have come to the Birmingham area, and we’re delighted to be he here,” said Colin Nicholson, the chief executive of British Wrestling, the country’s national governing body.

“We’re a minority sport in this country, but interest and take up is growing all the time, and it’s lovely to be showcasing the sport in our second city, which has some flourishing clubs.”

Indeed, schoolteacher Kevin Webb, representing Pariah Wrestling Club, in Acocks Green, made it all the way through to the quarter-finals. And though disappointed not to make the last four, he was delighted to competing at a national tournament in his home city. 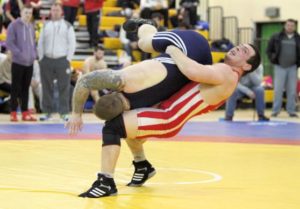 “The atmosphere had been great, and whatever level you are, you can’t help but be enthused at events like this,” he said. “Wrestling’s a fantastic sport, and continues to be a hidden gem in this country.

“It’s great for youngsters as it gives them a tremendous grounding for everyday life, in terms of fitness, self confidence, and perseverance among other things.

But it’s a great sport for all ages, and I would recommend it to anyone.”
Wrestling retained its place as an Olympic sport after much successful lobbying and campaigning by supporters last year. And that always proves a big incentive, among young people, to give the sport a go. 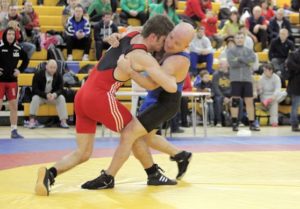 Said Mr Nicholson: “The opportunity to be good enough to represent Team GB at the Olympics is as big an incentive as you could have. Only a few ever achieve it, but it’s always good to chase a dream.

“But being an area, or even a national champion is always a big incentive and achievement, and for whatever reason you choose to take it up, it’s great fun, and great for fitness and self confidence.”

Wrestling was one of the featured sports in the Ancient Olympics, and has featured in all bar one of the modern Olympics, since 1896. 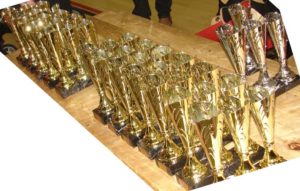