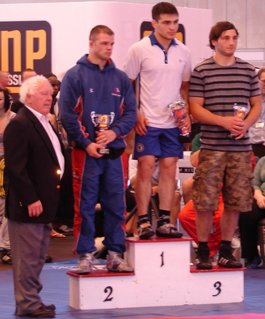 The English Senior Freestyle Wrestling Championships was held on 22/23 May 2010 at the NEC Arena, Birmingham as part of a multi-discipline show entitled ‘Bodypower‘ including boxing, weightlifting and martial arts.

Prizes were presented by Albert Aspen, Bronze medal winner in the Featherweight 62K category at three consecutive Commonwealth Games in 1958, 1962 and 1966.  Albert’s son Brian (Bantamweight 57K) also won three Commonwealth Medals including Gold in 1982.  The Championships were a qualification event for aspiring competitors for the forthcoming Delhi Commonwealth Games in October and were attended by representatives from Commonwealth England and UK Sport.

British Wrestling’s Chairman writes “The show was well attended over the two days and wrestling certainly attracted more than its share of interested spectators. British Wrestling took this opportunity to showcase our sport to the wider public and from that point of view it was a huge success.

The standard of British wrestling continues to improve. There were some very competitive and tight matches particularly in the 60K, 66K, 74K and 84K categories in the men’s division with the eventual winner of each cateory being in doubt until the final whistle.

My two best wrestlers of the event were Anastasia Buriatynska in the women’s division and Philip Roberts in the mens. To me the most improved athlete was Louisa Salmon.

Overall it was a very enjoyable two days of wrestling. I would like to thank the organisers of ‘Bodypower’ for allowing us to showcase our event and to the BWA volunteers, officials and all the competitors and coaches who made the English Seniors a resounding success.’

Photos of Championship available via “On The Mat” and “Nigel Farrow Photography.”