On the 18th May 2013, Malcolm Morley, Chair of the British Wrestling Association, attended the FILA Extraordinary Congress in Moscow.

The Congress was held in the aftermath of a decision of the Executive of the International Olympic Committee to expel wrestling from participation in the Olympic Games after 2016.

In an effort to try to overturn that decision it was necessary for the sport of Wrestling to modernise – in terms of structure, to make the sport more dynamic and spectator friendly, particularly in terms of understanding the rules of competition.

To this end the Agenda of the Congress reflected the modernisation of the FILA Constitution in relation to more women and athletes involved in the workings of the FILA Bureau, a more modern structure for dealing with complaints and disciplinary issues together with the setting up of relevant commissions.

It also addressed the International Wrestling Rules in an effort to create a more dynamic sport, a more understandable and friendly set of rules from the point of view of spectators, the media and participating athletes.

The changes to the Rules will be dealt with in more detail in a separate document but they can be briefly summarised as: 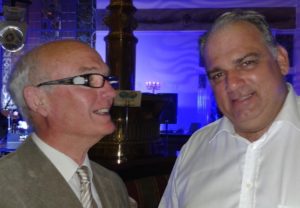 The Congress voted in favour of the changes to the FILA Constitution and the new Rules. The Congress also endorsed the Acting President, Mr Nenad Lalovic of Serbia (Pictured with Malcolm Morley, Chair of British Wrestling,) as the new President of FILA until the next Congress in 2014.

During his acceptance speech, Mr Lalovic gave all of those at the FILA Congress a small gift. He said that the person in that envelope would be responsible for putting the changes in wrestling into effect. The gift was a small mirror.
The Congress also confirmed the decision of the FILA Bureau to eliminate grappling and mixed martial arts as recognised styles of wrestling under FILA management. This will take effect from 1st January 2014.

As always, the Russian Wrestling Federation, hosts for the Congress, were meticulous in their organisation and provided the very best in terms of accommodation and hospitality to the assembled wrestling family.

Everyone in wrestling has their part to play in trying to overturn the recommendation of the Executive of the IOC to expel wrestling from the Olympic Games and all should work together to modernise the sport in the UK and on the international front.