FILA president Nenad Lalovic met with reporters Saturday at the European Championships in Vantaa to discuss ongoing changes to the sport of wrestling.

Lalovic, who is still recovering from surgery to repair a fractured arm, met with members of the media for 45 minutes at the Trio Areena just outside Helsinki.

Reporters asked the FILA president about a variety of topics including the effects brought about by the new rules, plans for the future growth of wrestling and the ongoing challenge to ensure wrestling would retain a partnership with the International Olympic Committee (IOC).

“We did much last year, but our job is not finished. We have to regain our position as a core sport. We have to struggle until 2017 when the IOC will decide which sports will be core, and which will not,” said Lalovic. “Everything we do now — in this moment — is to prepare for the IOC in 2017.”

Lalovic said that in order to gain the confidence of the IOC it was necessary for FILA to communicate with members of the IOC while also continuing to present wrestling in a way that is both understandable and enjoyable for fans and wrestlers. 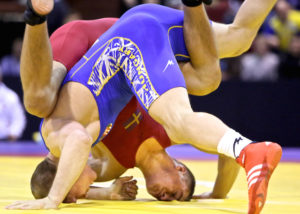 “The wrestling and the fans are the main part of the sport,” Lalovic said. “The relationship between the spectators and those on the mat is the most important thing. The rest of us? We are just the accessories.”

With the Greco-Roman days of the European Championship starting Saturday, Lalovic also answered questions on the recent increase in action seen on the mats, which he noted that local fans were vocal in supporting.

“First, we have a very nice audience today — the hall is filled with people,” said Lalovic. “Finland has a great wrestling culture and an excellent organization. We are used to great events in Finland.”

“You can witness the improvements today on the mats. We often have results 12-9, 10-6 and 14-12 that has never happened before. That is what we wanted with our rules changes. ..lots of action and lot of activity. It has been a big success.” 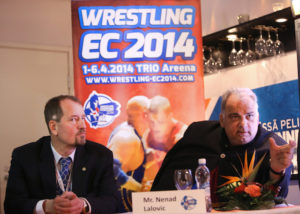 Lalovic and Karri Toivola, head of FILA’s referee commission, also addressed concerns that the sport would once again fall into the habit of changing the rules the day, or week before a competition, as it had before the 1992 Olympic Games in Barcelona.

“You have to modernize every sport, every day. So when writing the new rules, you know that you are not writing the Bible,” Lalovic said. “Every solution that improves the sport will be adopted in the future, but these rules will only be small changes. Fine tuning.”

Lalovic told reporters to also expect a variety of other significant changes over the next three years. In addition to changing the color of the yellow competition mats, FILA is looking into new uniform options for both wrestlers and referees.

“We will find a uniform for the referees that is more appropriate,” said Lalovic. “They need to be able to move with the action.”

In addition to on-the-mat growth, Lalovic also mentioned several gains made in marketing the sport of wrestling around the world. The Serbian leader said that FILA was close to signing deals with Eurosport and a large broadcasting partner in the United States, though any deal would still need to be finalized and approved. He also mentioned the sport’s recent surge in popularity on social media sites Facebook and Twitter.