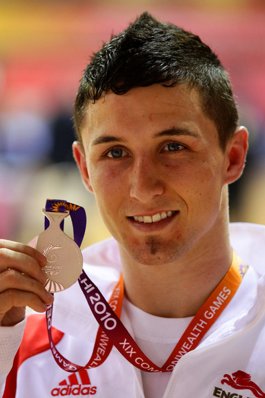 England’s Terence Bosson had to settle for silver as India’s Ravinder Singh clinched greco-roman wrestling gold on the second day of the XIX Commonwealth Games in Delhi.

England won two swimming gold medals earlier this afternoon, but European silver medallist Bosson could not add a third in the men’s 60-kilogram class as Singh proved too strong with a comprehensive triumph.

The 25-year-old Bosson had beaten Pakistan’s Sarmad Afaq in the first round and South Africa’s Marius Loots in the semi-final to reach the title bout. 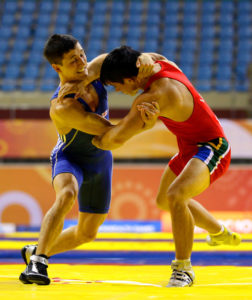 Bosson has won 26 South African national titles but now lives in Newcastle and qualified for England through his mother.

Encouraged by the roars from the partisan crowd, Singh claimed the first points, going 2-0 up late in the first round. He claimed five more points within 20 seconds of the second round commencing and was close to forcing Bosson out of the ring.

And Singh ended Bosson’s hopes soon after. Singh was awarded a 9-0 win, with seven of his points coming in the second round.

“I would’ve like gold, but I’m happy with silver,” said Bosson. “He was very hard, aggressive and tired me out. It means I must try harder, train harder and try harder for next time.”

The 2010 Delhi Commonwealth Games is the first in the history of the games to have greco-roman wrestling. And Terence’s Silver is the first medal for a Home Nation since 1994.

Also in greco-roman at 96kg, Mark Montgomery for Northern Ireland met the ultimate winner India in his first match and was then defeated by South Africa in the repechage. He will have another chance in Freestyle on Saturday.

Tomorrow (Wednesday) there is the opportunity for more medal success in the second day of greco-roman. Myroslav Dykun (66kg) and Brett Hawthorn (66kg), Sean Keogh and Mohamed Osman (84kg ) and Mark Cocker (120kg) see some competition between the Home Nations as well as the rest of the Commonwealth.