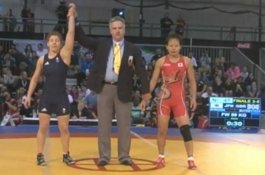 Olga Butkevych has won Britain’s first ever women’s World Championship medal – and defeated the London 201 Olympic bronze medallist on her way to doing it.

Butkevych made up for the disappointment of her first round exit at the Olympic Games last month by taking 59kg Bronze in Edmonton, Canada. She defeated Japan’s Kyoko Shimada to secure her medal.

Earlier she saw off Russia’s Ekaterina Melnikova in her first match, and then beat the London 2012 Olympic (55kg) bronze medallist Yuliya Ratkevich to qualify for the semi-finals of the World Championship 59kg division.

There, 26 year old Manchester-based Butkevych lost to China’s Lan Zhang, but bounced back to see off Shimada for her medal.

“This is a fantastic achievement by Olga, and it should not be under-estimated,” said Shaun Morley, British Wrestling’s Performance Director until he stood down last month.

“She’s a world class athlete, and has proved that with this fantastic performance – even more so because she was in a really tough half of the draw. Indeed, had she been in the other half, I’d say she might even have gone all the way to the gold medal match.”

This is the second major success for Butkevych, who was placed 11th out of 19 wrestlers at the Olympics. She also won 59kg Bronze medal at the 2011 European Championships in Dortmund.