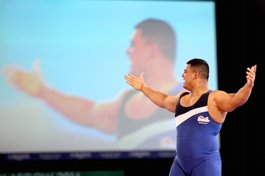 Great results. A great day for England, Wales and British Wrestling and a great profile for the sport of Wrestling in the UK.

Wrestling took take place in the Scottish Exhibition Conference Centre (SECC) on the first of 3 days.  The venue was packed with cheering crowds who were vociferous in support of their Scottish and Home Nation crowds.

Sir Steve Redgrave (a Team England Ambassador) was amongst those that came to watch and he said that FILA’s rule changes at the turn of the year made the action and the points easier to understand. 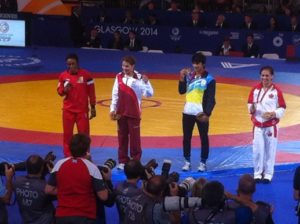 Yana Rattigan (48kg) made fast progress through the opening rounds but in the evening final, Vinesh of India proved better on the day in a closely fought match where Vinesh survived a late comback by Yana with a final score of 11-8. (FILA commentary link) 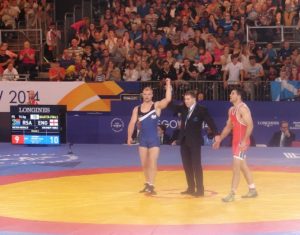 Michael Grundy (74kg) narrowly lost his semi-final against eventual silver medallist Abbas of Pakistan, getting caught in a series of moves that ended in a pin, but recovered his composure in the afternoon break to defeat Galea of Malta swiftly in the Bronze Medal match 10-0
Chinu (125kg) fought four matches, with a defeat by the eventual Gold medallist, Jarvis of Canada, and a Bronze medal win against Mkanga of Kenya 12-1.  Chinu achieved front page coverage on the FILA website for his feat (link). Their caption read “England’s CHINU accepts the cheers of a packed house after earning his Commonwealth Games bronze medal with a 12-1 victory over Hollis Ochineng MKANGA (KEN) Wednesday in the Wrestling Hall at the SECC Arena in Glasgow” 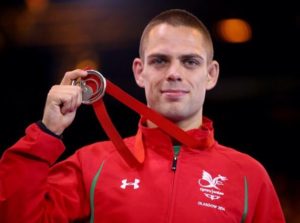 Welsh Wrestling made history when Craig Pilling (57kg) won Bronze. Alan Jones, Head of Performance said Wales has never had a medal in the games as the Welsh Wrestling Association was only formed in 2009 as an organization by Alan and Sue Jones so as to prepare for the previous Commonwealth Games in Delhi in 2010 were Wales put in a team for the first time but failed to medal. Wales’ Tommy Hawthorne (74kg) won his first fight against Ray of Bangladesh but then had to fight eventual Bronze medallist Nigerian Bibo, but Tommy gave his all to try and score but Bibo was too strong with Tommy losing at the end 4-0. 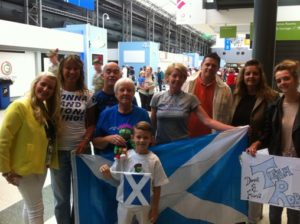 Fiona and Donna Robertson (48kg twins) bowed out from the contest, but not before thay had done a huge amount to raise the profile of the sport of wrestling in Scotland.  In the evening, they appeared on the BBC “Tonight at the Games” with Claire Balding, following on from Lord Coe and Daley Thompson.

Omar Tafail, Brian Harper, Ross McFarlane and Sophie Edwards all worked hard in their matches, but lost out to better wrestlers.
India Won three and Canada two golds on this opening day of Wrestling at Commonwealth Games