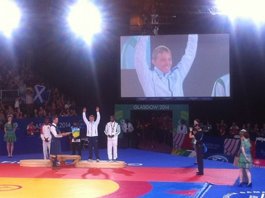 Medal hopes of Scotland and England were realised by Louisa Porogovska (né Salmon) and Alex Gladkov who triumphed in their Bronze medal matches. 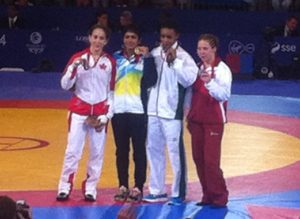 Alex Gladkov (65kg) had a sharp 11-0 introduction against eventual Gold medallist Dutt (IND). However, in the repechage, Alex first saw off Gareth 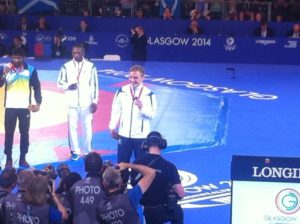 Jones 10-0 and then, in one of the noisiest, highest scoring (22-16) and most thrilling contests of the Games, he defeated Perera (SRI).

As was stated on the FILA website “Though not wrestling for gold, the night’s most electric match belonged to Scotland’s Alex GLADOV and Sri Lanka’s Chamara PERERA. The pair exchanged several four-point moves to rack up a total of 38-points in their bronze medal dual at 65kg.” (link)
“Gladov would end up winning by technical fall, but at times barely kept a lead, with Perera once narrowing the gap to a single point, 11-10. Once his hand was raised, Gladov was serenaded him with raucous applause from an elated Scottish contingency.” 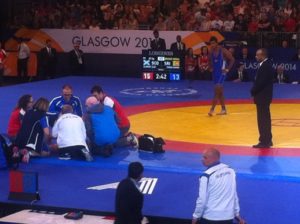 Part way through, Alex injured his knee, but with medical attention on the mat and Scotland’s medal hopes weighing heavily on his shoulders, he bravely decided to carry on to victory.

Alex secured a second historic Bronze medal for Scotland. The noise from the home crowd was immense at this popular victory.
Philip Roberts (65kg) faced a challenging match from Salman (PAK), but from being ahead, as time ran out, they went level to 6-6 with Salman scoring the last point. Salman then went on to lose ‘v’ Balfour (CAN) the eventual Silver medallist, thus denying Philip the repechage.

Along with Philip and Alex in the 65kg category was Gareth Jones. Gareth took Kitiona (KIR) to a 10-0 defeat, but Gareth himself suffered the same result at the hands of Dutt (IND) eventual Gold medallist in the quarter finals. Dutt employed his trademark ‘fitele’ (leg-twisting) technique on Gareth that he had used while winning Bronze in the London Olympics. Gareth then met Alex in an all Scottish repechage match, again with the same result. 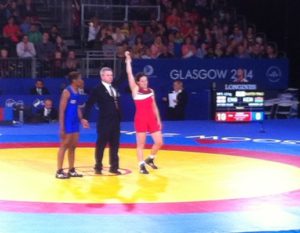 Chloe Spiteri (63kg) acquitted herself well, first putting out Ndungu (KEN) 10-0 but was then put to repechage on poiints by eventual Gold medallist Lappage (CAN). In the Bronze medal match, Spiteri scored points off Oborududu (NGR) and took her to the full 6 minutes but there was a clear victory of 11-2. 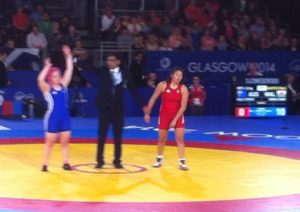 Also in 63kg was Sarah Connolly (WAL) who had a victory ‘v’ Kelly (AUS) by grand superiority 10-0, then coming against the Silver medallist Jakhar (IND) losing 13-2 after her challenge was rejected. In her Bronze medal match, Sarah lost by grand superiority to Metala (CMR)

Others taking part were Lewis Waddell and Luigi Bianco representing Scotland and Oliver Cole of Wales. 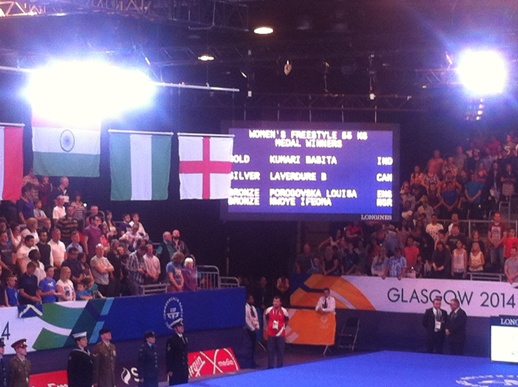 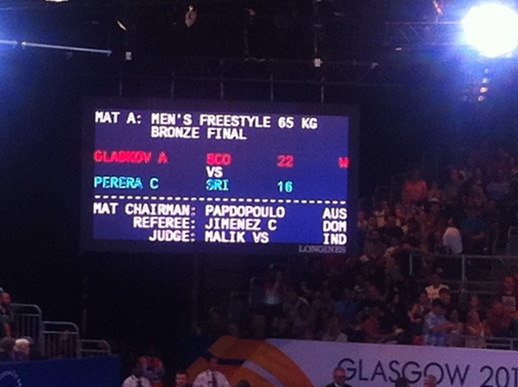 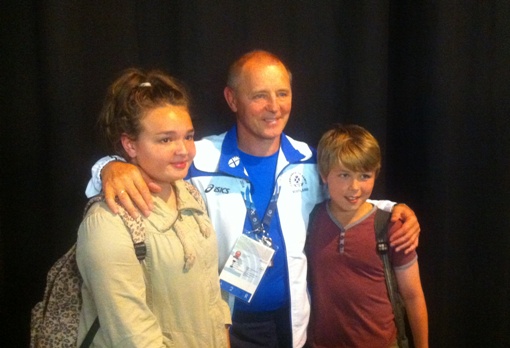