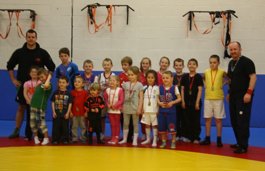 Redhog Wrestling Club introduced Mini-wrestling classes for kids from 5-8 years old in August this year at the Evolve Gym venue in Poleglass. The numbers have risen steadily at both classes on Tuesday and Thursday evenings.

“The response has been phenomenal,” says Coach John O’Rawe, “we started with around seven youngsters and due to word-of-mouth from parents, friends and the kids taking part, the numbers have increased to around thirty and it is still rising”. 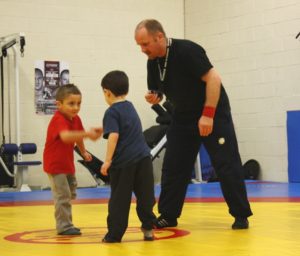 Wrestling is one of the original Olympic events and is by far the best at building self-esteem. Kids wrestle naturally and they absolutely love it, the sportsmanship, values and life skills it teaches are the best. There is room for everyone in wrestling, including those who have not found their place in other sports.

“It is always a little nerve-racking starting new classes” says Coach O’Rawe, “because you just don’t know how they will be received. However, we need not have worried our Mini wrestling classes have really boomed, attracting folk from Poleglass and the surrounding areas. 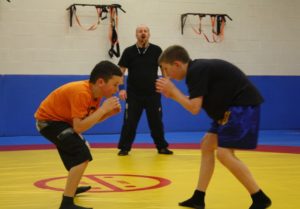 We have a lot to offer, an Olympic standard wrestling mat placed within the Evolve Gym, an important aid for training and competitions. Our Grass-roots promotion and expansion is second to none and we have the best structured coaching delivered by John O’Rawe, the National, Commonwealth and Talent Development Coach and Coach Glenn Elliott. 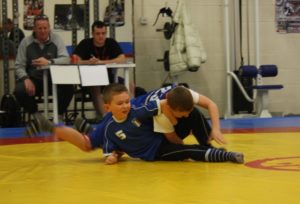 With our athlete development and ongoing support for grass roots through to junior and senior age groups and the effective recognition of achievements, our new members can join our seasoned wrestlers who have accumulated a great number of Championship Titles.

Responding to great feedback from entrants at our inaugural Redhog Rookie Wrestling Challenge event, we held another one at the Evolve Gym on Saturday 26 November.

The event is for Novices with less than 3 years wrestling experience focussing on each person having an enjoyable, action-packed learning experience. 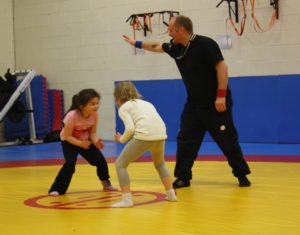 Our Mini wrestlers debuted at this event, giving them the opportunity to experience a wrestling competition. “What a success, we had that many taking part that we really could have held a Mini tournament on its own,” says Coach O’Rawe.  “A big thanks to everyone for their continued support; and special thanks to our friends who made the long journey from Dublin.”