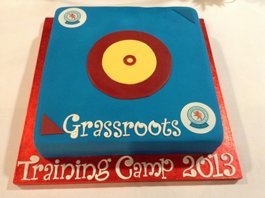 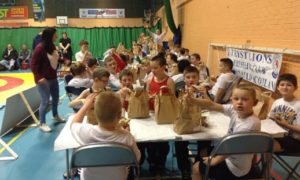 The camp was designed for youngsters between the ages of 6-12 and over 50 children from Tryst, Tullibody and Denny wrestling clubs took part in the event. Wigan & Leigh and Sharples clubs travelled up from England for the event.

Said Eddy Kavanagh of Sharples club, “The camp was exceptionally well organised and it was obvious that a huge amount of planning and care from the heart had gone into the event.” 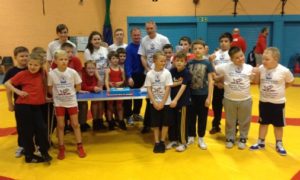 The young wrestlers were split into two categories and given a mat each; 6-9yrs and 9-12yrs were treated to a variety of different coaching methods and techniques. 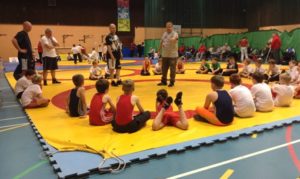 Steven McKeown and David Connelly from Tryst Lions, Dave & Mike Grundy from Wigan & Leigh, Eddy Kavanagh from Sharples, Alan Harper & Colin McLaren from Tullibody and Willie& Micheal Airnes from Denny were each given turns to coach and rotate between wrestling mats.

The first session began at 10-11:30am, followed by a lunch break before the second session took place at 1-2:30pm. The day finished with a takedown competition from 2:45-4pm.

On the Saturday night, a function was held at Dullatur Golf Course where the cake, in the shape of a wrestling mat, was presented to all the wrestlers. 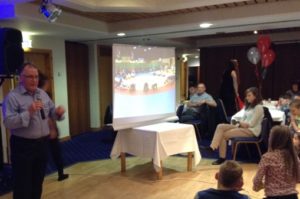 Bobby McLucas, a silver medallist at this year’s world veteran champion ships (link) in Sarajevo, Bosnia, was then presented with the clubs most improved wrestler of the year award by club president David Alexander.

Afterwords, a hired DJ played music while the children danced well into the night.

The final session took place on Sunday from 10-12pm before the cake was served to all wrestlers, parents and coaches.
Tryst coaches Steven McKeown and David Connelly would like to thank everyone who participated in the event and to all volunteers who helped to make the training camp a great success.