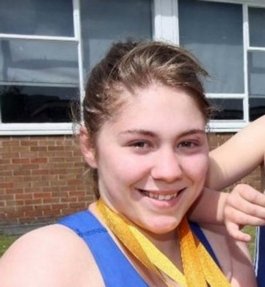 On Tuesday 9th August I travelled to Warsaw, Poland with Shannon Hawk and Chelsea Murphy, accompanied by Elizabeth Scott, the welfare officer ahead of the 2011 European Wrestling Championships.

After a smooth flight we arrived in the sunny capital, all of us with high expectations and we went to Warsaw School of Life Science’s which was the hosting venue for the championships. We then met up with the rest of the team from across the UK which included Tony McKenna, Brian Harper and George Ramm and we were all coached by Anatolii Kharytoniuk, the England Development Coach.

Some of the boys had already wrestled by the time we had arrived and it was clear to see that the standard was of a very high and an exceptional level which the firemans technique proved to be a favourite with the majority of the other teams and was on show in almost every bout, each to a different variation.

There were 3 mats in the competition hall surrounded by lots of spectators, camera crew and the place we all wanted to be on … the medal podium. There was also another 2 training mats in the warm up hall which were filled by lots of hopeful wrestlers drilling techniques, warming up and lots of people checking their weight.

As some would have been scared off by watching some of the top European countries wrestle, I was inspired. I had a strong feeling of determination to get back home and train hard, working to my limits in the hope I’d improve and be up on the medal stages with them some day.

Not only was this an incredible achievement making it to the championships but it was even more remarkable for me personally as I had made some history on my own home turf of Northern Ireland where I’ve become their first ever wrestler from any age group to have represented Great Britain at the Europeans, a proud moment for me and for all those who have worked in getting me to this stage.

As the week went on it was clear to see that there was an incredible level of team spirit, lots of laughter and thankfully no tears among the 6 of us who shared our sporting experiences, some more bizarre than others!

Although none of us medalled, each one of us tried our best, learnt a lot and many of us scored points within our matches and to have even represented our country was an achievement within itself. I managed to score 5 points off the bronze medallist and got ranked 13th, something I am very proud of in the 16 months I have wrestled.

Our team left Poland with a lot of unforgettable memories and a lot more experienced than before. The medal stages were was mainly dominated with Russian wrestlers, proving to be strong contenders in all weight groups.

I thoroughly enjoyed having the opportunity not only to go and represent my family, friends, club and my school but it has also been an absolute honour to have gone and represented my country – not something many people can say they’ve done!

I have had the best 10 weeks training up to the Europeans and in that time I haven’t just got fitter and stronger, but my wrestling knowledge has grown leaps and bounds and I am privileged to have got the opportunity to have GBR stamped on my back and to have wrestled at such a high level and at such a well known event and I am thrilled to say that I have learnt a lot from the experience and have got a lot of opportunities from my time away.