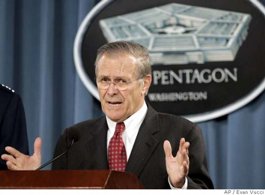 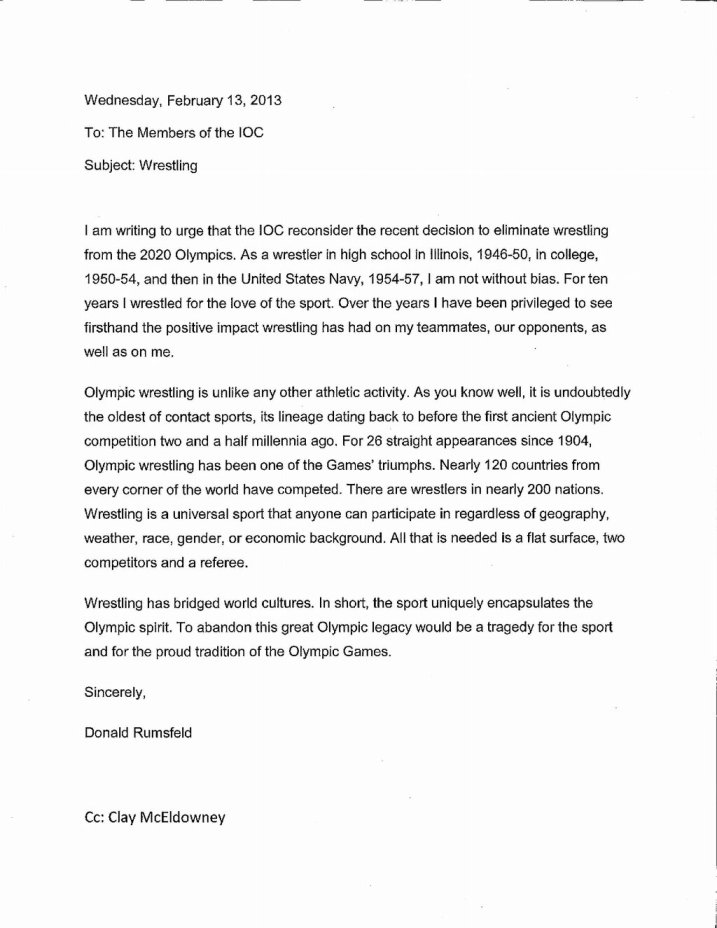 Donald Rumsfeld served as secretary of defense under Presidents Gerald Ford and George W. Bush. He is the author of“Known and Unknown: A Memoir” and of the forthcoming “Rumsfeld’s Rules.”

The International Olympic Committee issued a surprise decision on Tuesday to exclude wrestling from the 2020 Olympic Games. For a number of years, the committee has drawn fire for its lack of transparency. With its secret vote to remove one of the original Olympic sports — one that dates back 21/2 millennia to the first games in ancient Greece — it has added another decision that deserves scrutiny.

Let me suggest that when advocates of wrestling make their case for readmission, the committee pay special attention to the case for this proud sport, which once was a favorite of Abraham Lincoln’s.

I am not without bias when it comes to the sport. I was a wrestler for 10 years — in high school, at Princeton University and as an officer in the Navy, where I competed for a spot in the 1956 Olympics (unsuccessfully, as it turned out).
Wrestling’s Olympic legacy is unmatched. It is one of the oldest contact sports and was an important part of the first Olympic Games, which historians date to 776 BC. The first modern Olympics, in 1896, included wrestling as a marquee event. The sport has missed only one Olympics since then, in 1900. For those counting, that is 26 straight Games over a span of 112 years.

Wrestling is a universal sport. To compete, all that is needed is an opponent and a flat surface. Anyone can participate, regardless of geography, weather, race, gender, culture or economic background. It doesn’t require a golf course, a swimming pool or a horse. More than 170 nations from all over the globe have competed. In the 1996 Olympics alone, 75 countries were represented on the mat. Athletes from a great number of nations have won medals — countries as diverse as Iran, South Korea, Sweden, Cuba and Hungary. Indeed, more countries have been represented on the winners’ podium for wrestling than for nearly any other sport.

Wrestling uniquely encapsulates the Olympic spirit, even though it harkens back to older and more martial virtues, rather than the arts festival and Kumbaya session that some may prefer the modern Games to be. Few other sports are so directly aggressive: It is you vs. one other person. There is nothing to hide behind; there are no time-outs. It is all up to you. Yet, precisely because of those conditions, few other sports create such remarkable camaraderie among their participants.
In response to the Olympic committee’s decision, members of the international wrestling community have been reaching out to one another. They are finding common purpose to create a compelling argument for readmission.

While I have tremendous respect for athletes of every Olympic sport, it is difficult to understand why wrestling was singled out for exclusion. I would imagine that it has at least as many fans across the globe as ribbon twirling, trampoline and speed-walking. No wonder the decision has been met with bafflement in many quarters. U.S. Olympic Committee chief executive Scott Blackmun was among those who were surprised, “given the history and tradition of wrestling, and its popularity and universality.”

To exclude wrestling from the Olympics would be a tragedy for the sport, for the athletes and for the proud tradition of the Games. Over thousands of years, wrestling has spread to every continent. It is practiced in hundreds of countries and expressed through a multiplicity of cultures. It has thrived through war, depression, social changes and globalization. But the Olympic committee panel didn’t see fit to include it in the 2020 Games. Something is wrong with that picture.

Over my eight decades, I’ve collected a list of maxims and life lessons that I’ve found meaningful and instructive. These eventually became dubbed “Rumsfeld’s Rules.” One of the more recent additions comes from one of the most successful wrestlers in the world, Dan Gable, who won the gold medal in the 1972 Olympics without giving up a single point. “Once you’ve wrestled,” he said, “everything else in life is easy.” Indeed, it’s hard to imagine many other sports that require such focus, discipline and second-by-second attention to the movements of an opponent.