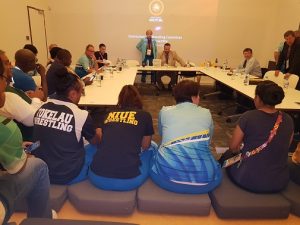 In a meeting of the Commonwealth Wrestling Committee, Ian Wiggett was appointed as Secretary General.

The Committee met in the afternoon of the 3rd day of wrestling at the Gold Coast Games.

The Committee approved a new constitution.

Ian is already on the Board of the British Wrestling Association as Home Nations Director for Wales and is Chair of the BWA Nations and Regions Committee and BWA Sport Committee.