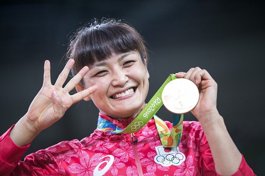 Kaori ICHO (JPN) won the 58kg Gold medal at the Rio 2016 Olympic Games on Wednesday to become the first wrestler – male or female – to win a gold medal in four consecutive Olympic Games.

All this on a night where Japan won Gold in each of the three weight categories in contention.

Icho worked her way behind her opponent, Valeria KOBLOVA-ZHOLOBOVA (RUS), with only seconds to spare in the 58kg final for a 3-2 victory and the gold medal at Carioca Arena 2.

Icho has won gold medals in each Olympic Games since the debut of women’s wrestling at Athens 2004 and has also won 10 world championships titles from 2002 to 2015.

Koblova, who lost to Icho in the 2014 world championship final in Tashkent by technical fall, presented a tight defense to the champ and slipped behind for a takedown late in the first period for a 2-1 lead at the break.

The lead stood through most of the second period, until Koblova made a takedown attempt and Icho struggled to get around behind — gaining control only in the final seconds of the bout.

At 48kg, three-time world champion Eri TOSAKA (JPN) scored off a late single-leg attack in the closing seconds of the 48kg final for a 3-2 victory over Mariya STADNIK (AZE) and her first Olympic Games gold medal.

The final was a virtual replay of last year’s world championship final, as Tosaka overcame a two-point deficit with a late takedown to win at the buzzer.

Sara DOSHO (JPN), the winner of bronze and silver medals at the last three world championships, snuck behind London 2012 and world champion Natalia VOROBIEVA (RUS) in the 69kg final with 30 seconds remaining for her first world-level title and the Olympic Games gold medal.

In the bronze medal matches at 48kg, 2013 world champion SUN Yanan (CHN) launched Zhuldyz ESHIMOVA (KAZ) for points on her way to a technical fall at 48kg. Elitsa YANKOVA (BUL) opened an early five-point lead and held on for a 7-6 victory, despite a four-point arm throw by Patricia BERMUDEZ (ARG).

At 58kg, with only seconds remaining in their bronze medal final, Marwa AMRI (TUN) dumped 2015 world bronze medalist Yulia RATKEVICH (AZE) to her back for four points and Tunisia’s first-ever Olympic Games medal in wrestling with a 6-3 victory.

Sakshi MALIK (IND) rallied for eight points in the second period, including the clincher in the closing seconds, for an 8-5 win over Aisuluu TYNYBEKOVA (KGZ) and India’s first-ever Olympic Games medal in women’s wrestling.

At 69kg, Elmira SYZDYKOVA (KAZ) came up with a big headlock on her way to a 7-4 win over Enas AHMAD (EGY) while 2012 world champion Jenny FRANSSON (SWE) won Sweden’s first Olympic Games medal in women’s wrestling with a 2-1 victory over Dorothy YEATS (CAN).