The International Olympic Committee Executive Board, today in St Petersburg, decided that Wrestling, Baseball/Softball and Squash be consided for inclusion in the 2020 Olympic Games by the full 125th IOC Session on 7th September 2013.

One of these three shortlisted sports will go through the 2020 Olympics, alongside Rugby Sevens and Golf.

FILA President Lalovic noted that “While our place in the Olympic Games is still not guaranteed, this decision recognizes the great lengths to which we are going to reform our sport and address the IOC’s concerns.”

The FILA team that made today’s successful presentation are shown in the photograh: five people who have made wrestling their lives told the story of why the sport should remain in the Olympic Games. 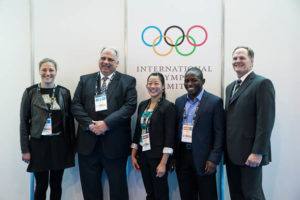 From left to right, Lise Legrand is a Vice President of the French Wrestling Federation, an Athens 2004 Bronze Medalist and 1996 World Championships Bronze medalist.

Nenad Lalovic of Serbia is the current President of FILA. He’s leading the charge to state wrestling’s case before the IOC.

Carol Huynh is a Canadian wrestler who won a bronze medal in Women’s Freestyle (48 kg.) at the 2012 London Games, and a gold medal at the 2008 Beijing Olympics. Huynh was born in British Columbia to ethnic Chinese refugees from northern Vietnam

Daniel Igali is a Nigerian-Canadian wrestler who won a gold medal in Men’s Freestyle (69 kg.) at the 2000 Olympic Games in Sydney. He grew up in Nigeria with 20 siblings and gained refugee status in Canada in 1994. His gold was Canada’s first ever in wrestling. He is currently a member of Nigeria’s provincial parliament.

Jim Scherr represented the United States at the 1988 Olympics in Seoul and was the first Olympian to ever lead the U.S. Olympic Committee (USOC), where he served from 2005 to 2009. He had previously been the Executive Director of USA Wrestling from 1990 to 2000.