Japan’s Yoshida honoured by her government 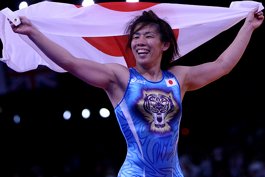 The Japanese wrestler Saori Yoshida (55kg) has just won her tenth world title at the 2012 World Championships in Strathcona County, Canada, to complete the four world titles she had won in cadets and juniors from 1998 to 2001.

Her impressive record includes Gold Medals at the 2004, 2008 and 2012 Olympics.  Her amazing feats make her the most titled wrestler in history – outshining the fearsome Russian Alexander Karelin, who won three Olympic golds and nine world championships between 1988 and 1999.

Since her access to senior competitions in 2002, Yoshida has remained undefeated at all Continental Championships, World Championships, Asian Games, and Olympic Games she took part in.

Yoshida, her coaches and the Japanese Wrestling Federation should be congratulated for this unprecedented achievement.

Yoshida will receive Japan’s People’s Honour Award for “bringing hope and courage to society,” the Japanese government said on Tuesday.

It is only the 20th time the honour has been bestowed in Japan.