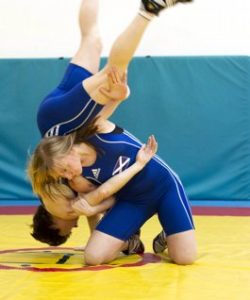 At 25 years old and after being in wrestling for only 18 months, Jayne Clayson is poised to represent Scotland at the Commonwealth Games in Delhi in October.   Jayne has just been named as the Clydesdale Bank Athlete of the Month for January and will receive a cheque for £500 towards her competition and training costs.

Jayne (55K) won a bronze medal at Commonwealth Championships, Jalandhar, India, which she describes as the highlight of her sporting career so far.  Scotland’s female wrestling team collected the cup for 3rd placed team.

“This is the first award of any kind that I have won, said Jayne so I am absolutely delighted. I need some new wrestling boots which can cost between £100-£200 for good ones, along with other training kit so the money will be really useful as I can only work part-time as a gym assistant to fit round my training and competitions.”

Jayne’s training involves five two hour sessions on the mat each week overseen by Ukrainian coach Volodymyr Gladkow at Palace of Art in Glasgow.  This is complemented by several strength and conditioning training sessions each work organised by the Central Scotland Institute of Sport, along with medical and physiotherapy support if required.

Having won medals at both the British and Commonwealth Championships so far this season Jayne only needs to do well at one final competition in Glasgow later in the year to secure her place on Team Scotland.

Wrestling for women will be making its Commonwealth Games debut in Delhi.  Wrestling is a big sport in India and one in which they have targeted significant medal success.