Kaori Icho: Pursuing Her Own Perfection 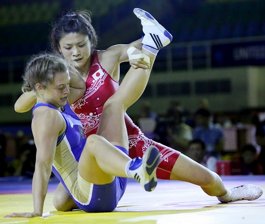 With thanks to UWW’s Tim Foley…

When Kaori Icho won her ninth world championship Thursday night in Tashkent absent were the backflips, tears and group hugs of previous champions. The Japanese champion fulfilled her requirement to wave the Japanese flag, but otherwise bowed off the mat, shook hands with the referees and walked off the stage.

Icho’s unaffected reaction to winning a world title might be attributed to her three Olympic gold medals and eight previous world championships. All told, the Japanese great has won a total of 12 world titles, leaving her second all-time in female wrestling behind teammate Saori Yoshida who has 15 world titles on her resume. Those numbers make Icho and Yoshida inarguably the two greatest female wrestlers to ever walk the planet.

Despite the heady assertions and a 172-match winning streak, Icho is not interested in penning history or acquiring titles. She doesn’t want another gold medal for her bedroom or sponsorship money for her bank account. What Icho wants and why she still wrestles can’t be counted or written down.

It has to be seen.
Kaori Icho headed into the 2008 Olympic Games a woman under pressure. She was the defending 2004 champion and hadn’t lost a match since 2003. The media burden in Japan was growing and she felt a growing dissatisfaction with the sport and all its offerings.

Icho’s solution was to discuss retirement. Warm and thoughtful, Icho knew that female wrestling was still in its infancy and she could step off the mat as a two-time Olympic champion at the age of 24. Icho was young enough to conquer something new, maybe a sport, maybe a job.

Her older sister, Chiharu, an eventual two-time Olympic silver medalist, would also be competing in the Beijing Games and had already announced her retirement – a declaration that gave Icho the opening she needed to slough off the stress and unwanted attention of her wrestling career, should she choose to follow her sister.
In addition to her sister, Icho was sharing her Olympic journey with teammate and friend Saori Yoshida, who’d also won an Olympic gold in 2004 and was mentored by her father and national team coach, Eikatsu Yoshida.

“I know that the gold medals mean a lot to Saori,” says Icho. “This is what motivates her and what motivates many wrestlers. I was like this, too, but it wasn’t right for me. Something wasn’t working.”
Icho floated the idea of retirement and, in a country cued into the plans of their most dominant Olympians, the rumors reached the press. “I never made the decision to retire, but I did need a change. I very much needed a change.”

Icho had been training at the same club near Nagoya for much of her life. When she finally took a moment to look up from the mats at age 24 she wanted change.
“I had the same training partners and the same coach,” explains Icho. “ Nothing was wrong with them, I just couldn’t get stronger without something new. If I was going to stay in wrestling I needed to find a new path.”

Of course, Icho would win in Beijing. And, after her title was announced, she threw her arms in the air and beamed a smile. But that wasn’t from an appreciation of her achievement as much as an alleviation of the stress.

Icho sat out the 2008 World Championships – the model for other world meets for women run concurrently in Olympic years until 2016. Yoshida wrestled, and as she always seems to do, she won.
Icho chose not to retire, but she did decide to leave Japan. She hadn’t left wrestling, but she’d left Japan and moved to Canada.
“I wanted to experience life overseas and see how foreigners trained,” says Icho. “The biggest difference that I saw was how well the athletes and coaches communicated.”

In Japan the athlete-coach relationship is simple: coaches give instructions and wrestlers listen. In Canada, the coaches and the athletes had relationships; they enjoyed each other’s company on a personal level.

“I envied their relationships,” says Icho.
Icho traveled home to Japan, on occasion, but spent the majority of the next eight months training in Canada. She learned English, sat out the 2009 world championships and, in the time away from battling in competition, rediscovered what she loved about the sport — and it wasn’t winning gold medals.

In addition to envying the close coach-athlete connection she saw in Canada, Icho saw that training methods varied from country to country. Sheltered and cared for in Nagoya, she’d never seen training that didn’t include running (which she dislikes) and was able to use more power lifts in her strength training (which she likes).

When Icho returned to Japan she chose to spend much of her time at the national training center for male wrestlers and looked for college programs and coaches she liked. She spent weeks absorbing new techniques, and also new attitudes – how one school trained varied from another, and from that she cobbled together a loose emotional and physical sketch of what it would take for her to get back on the mats for competition. Icho became more focused on the techniques and chess match of wrestling than on the aggression so often used as a skill. She discovered that passion could always be defeated by pressure or circumstance, but technical acumen was unbeatable, and its acquisition is, in and of itself, fulfilling.

That Icho is uniquely talented cannot be questioned. Her speed and athleticism are evident to even the most casual wrestling observer, but that she’s more spry, more active and more technical runs counterintuitive to the sport’s natural maturation. Thirty-something wrestlers slow down; they are more often injured and often eschew finer movements in favor of fewer movements.
Icho, who turns 30 in June, says that her ongoing improvements are a result of training with men who focus her on better techniques and tougher training regiments. With harder work in tougher scenarios, Icho believes her body will more often retain new techniques.
“Men are more profound in their detail and the moves are more complicated and that makes learning them a serious process.”
Icho refuses to put an expiration date on her career. If she were as poetic in her career path as she is on the mat she might decide to wrestle until the 2020 Olympic Games in Tokyo. Should she win every championship from now until then, she’d end her career with 18 world titles including five Olympic gold medals. But the titles have never mattered, and she won’t start creating storylines for herself.

“I’m not sure when the end will come for me, but I will be wrestling all my life,” says Icho. “I am a wrestler, but I will know when my time as competitor must give way to my time as a coach.”
For now, Icho wrestles one match at a time. Always wondering if she can achieve perfection in her lifetime, knowing that her own expectations become loftier with each technique mastered.
“My goal, my only goal, is to get to closer to the image in my head of what wrestling can be,” says Icho. “Competition is important and it will enrich your life.”
”I’m only now seeing that improvement is what gives me satisfaction and puts a smile on my face.”