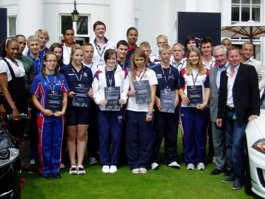 Wrestling’s own Katy Colebourne was one of 35 young athletes who received a bursary award at a Jaguar Academy of Sport presentation at the prestigiousHurlingham Club, Fulham, London.

The bursary fund aims to recognise, celebrate and inspire the best of sporting talent and success. Athletes were chosen through a selection process conducted by Sport Aid with the final decision made by the patrons and ambassadors of The Jaguar Academy of Sport.

Katy, a member of British Wrestling’s National Talent Squad and from Middleton & Wirksworth Club, Derbyshire, made her way down to London on 21st July.  Athletes at the ceremony were aged 14-24, representing 30 Olympic and Paralympic sports.

Katy described her experience… “I was presented with my award by John Johnson the Operations Director of Jaguar and Tim Lawler the Chief Executive of Sports Aid on stage.  Each athlete had to go on stage separately, with a brief description of their sport and achievements.  We were then introduced to Lord (Digby) Jones of Birmingham, chairman of The Jaguar Academy of Sport, and some of the Patrons of Jaguar, Colin Jackson, Jamie Baulch, David Roberts, Martin Brundle and many more, who all took the time to talk and question me on wrestling – many where quite amazed that a young girl wrestled!”

“After a fantastic lunch we then assembled on the lawn in front of the main house surrounded by Jaguar cars past and present for a photo call. Then we were left to explore the Salon Privé (The Luxury and Supercar Show).”

“This was the most memorable day I have ever had,” concluded Katy